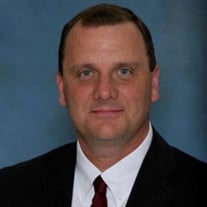 Coleman Funeral Home of Olive Branch Andrew “Andy” Cortus Orr, 54, of Olive Branch, MS passed away January 4, 2021. A visitation will be held on Wednesday, January 6, 2021 at 2:00 p.m. to 7:00 p.m. at Coleman Funeral Home (6815 Parkview Blvd, Olive Branch, MS). A graveside service for family and close friends will be held on Thursday, January 7, 2021 at 1:00 p.m. at New Liberty Cemetery in Vardaman, MS. Coleman Funeral Home of Olive Branch is in charge of arrangements. Andy Orr was born May 17, 1966 in Utrecht, Netherlands. He had been with the Desoto County School system since 1992. Andy received a Bachelor of Science Degree from Mississippi State University and later received a Master’s Degree in Education from the University of Mississippi. Before becoming Principal at Horn Lake School in 2011, he served as Assistant Principal at Desoto Central High School, an English teacher, the boys’ basketball coach and the Athletic Director at Olive Branch High School. Andy is survived by his wife, Rhonda Kristen Orr of Olive Branch; daughter, Sadie Rose Orr of Olive Branch; mother, Nancy Eaton of Houston, MS; brothers, Charles L.(Laura) Orr, Jr of Fulton, MS and Patrick A. (Lori) Orr of Hahira, GA. Andy was preceded in death by his father, Charles L. Orr. In lieu of traditional flowers, memorials in honor of Andy Orr may be made to the American Cancer Society (www.cancer.org ). Online condolences may be left on his Tribute Wall at www.colemanfuneralhome.com.

The family of Andrew "Andy" Orr created this Life Tributes page to make it easy to share your memories.

Send flowers to the Orr family.