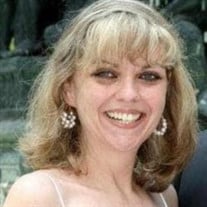 Coleman Funeral Home of Olive Branch Angela Ann Steele, 55, of Olive Branch, MS passed away on Friday, March 25, 2022. A visitation will be held on Friday, April 1, 2022, from 4:00 p.m. until 6:00 p.m. at Coleman Funeral Home of Olive Branch. Angela was born on August 1, 1966 in Memphis, TN. She was a graduate of the Mississippi Fire Academy and was a volunteer Firefighter in Walls, MS. She graduated with a Bachelor’s Degree from Ole Miss and was certified and licensed in Hypnosis. Angela enjoyed being outside and loved walking on the Riverwalk at the Mississippi River. She was an avid shooter and was very good at it. Angela and her mother spent quality time going to yard sales every Saturday. She was totally devoted to her family and especially her husband, Rodger. Angela is survived by her husband, Rodger Lee Steele, Sr. of Olive Branch, MS; daughters, Rebecca Pashia (Bruce) of Springfield, MO and Victoria Steele (Amy) of Leavensworth, KS; sons, Walter Emerson Durston (Lara) of Plattsmouth, NE, Rodger S. Steele, II (Amy) and Royce Steele (Anna) of Waynesville, MO; father, Walter Lewin Walker (Charlene) of Byhalia, MS; eighteen grandchildren; sixteen great-grandchildren and sister, Carla Gail Pitsch (Chris) of Hernando, MS. Angela was preceded in death by her mother, Ethel Fay Caldwell and daughter, Stephanie Noel. Memorials can be made in honor of Angela Ann Steele to St. Jude Children’s Hospital (www.stjudge.org).

The family of Angela Walker Steele created this Life Tributes page to make it easy to share your memories.

Send flowers to the Steele family.