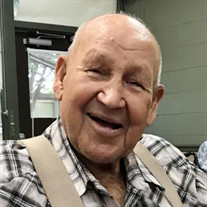 Coleman Funeral Home of Oxford Billy Ralph DePriest, 87, passed away Tuesday, March 9, 2021, in Eupora, MS. A visitation will be held Thursday, March 11, 2021, from 5:00 p.m. to 7:00 p.m. at Coleman Funeral Home. A service will be held Friday, March 12, 2021, at 10:00 a.m. also at Coleman Funeral Home. Bro. Donnie Buckner will officiate. Coleman Funeral Home of Oxford is in charge of arrangements. Billy was born to the late Dewey Bryan and Montie Quebelle DePriest in Waterford, MS. After graduating high school, he went on to college and obtained his Bachelor’s degree in Business Administration. He married his wife of 57 years, Bonnie Ruth Russell in 1953. Shortly after marriage, he enlisted with the United State Army on July 5, 1953, gaining the rank of Sargent. He was also a professional boxer from 1957-1966, having fought in both the United States and internationally with the Army Boxing Club. In March of 1964, Billy was honorably discharged from the Army and he and his family moved to Ft. Pierce, FL. While in Ft. Pierce, he worked in the Citrus Industry for almost 50 years. He thoroughly enjoyed volunteering, teaching and mentoring youth in his community. Shortly after moving to Florida, he became involved in coaching Little League. He was an integral part in the establishment of the Police Athletic League (PAL) which is now known as the St. Lucie Sheriff’s PAL. Billy mentored at risk teens in PAL’s boxing program and taught many Florida youth the importance of sportsmanship. His family and friends describe him as being generous, positive and kind. Being the mentor he was, he passed down these traits to his children and grand-children, paving the way for them to be successful in life. Billy had an incredible sense of humor with everyone he encountered. Mr. Billy will be dearly missed by his family and friends. He leaves a legacy of living life with a sense of humor and “rolling with the punches”. Bill absolutely loved his family with all his heart and wanted nothing but the world for them. Mr. Billy is survived by his four children, Sandra Faye (Glen Bobbit) Grigsby, of Wilkesboro, NC, Jennifer Sue Willis (Gary), of Lakeland, FL, Wanda D. Sapp, of Asheville, NC, and Andrew DePriest of Eupora, MS, eight grandchildren, Heather DePriest, of Ft. Pierce, FL, Kim Lawrence, of Monette, AR, Kara (Joseph) Johnson, of Truman, AR, Dean Bodoh, of Lakeland, FL, Kayla Willis, of Lakeland, FL, Shane (Kim Bonikowski) Green, of Port St. Lucie, FL, Hannah (Kevin) Buchanan, of Port St. Lucie, FL, and Aolani Summerlin, of North Wilkesboro, NC; nine great-grandchildren, Logan (Megan) Lawrence, Landon Lawrence, Desirae (Wesley) Benton, Dash Johnson, Isabella Johnson, Danika Johnson, Leia Shields, Carter Green, Anaya Buchanan; and one great-great-grandchild, Connor Benton. He was preceded in death by his wife of 57 years, Bonnie Ruth DePriest; three children, Shelia Kaye DePriest, Kenneth Scott DePriest, and Billy Dean DePriest; one son-in-law, Glenn R. Sapp; and one granddaughter, Grace Bonnie DePriest. In lieu of flowers, contributions can be made to St. Lucie Sheriffs PAL (www.stluciesheriffpal.com) or your local Police Athletic League. Please leave online condolences on the Tribute Wall at www.colemanfuneralhome.com. If you are unable to attend the service in person, you may view the service from the comfort of your home at https://www.colemanfuneralhome.com/obituaries/Billy-Depriest-3/#!/TributeWall.

The family of Billy Ralph DePriest created this Life Tributes page to make it easy to share your memories.

Send flowers to the DePriest family.