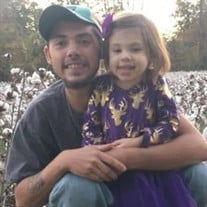 Coleman Funeral Home of Oxford Bobby Edward Pope, 24, passed away on Sunday, November 21, 2021. A visitation will be held Friday, November 26, 2021, from 12:00 p.m. to 2:00 p.m., at Coleman Funeral Home of Oxford. A funeral service will be held immediately following at 2:00 p.m., also at Coleman Funeral Home of Oxford. Interment will be at Pineflat Cemetery. Rev. Dr. Billy Stonestreet will officiate. Coleman Funeral Home of Oxford is in charge of arrangements. Bobby was born to Johnny and Joyce Pope. Bobby is described by his family as being funny, sarcastic, and having a free spirit. He was very adventurous, often exploring in the woods whenever he got the chance. He enjoyed the outdoors, fishing, and hunting. During his free time, he could often be found tinkering with different things, whether it be taking apart and rebuilding something or just fixing things. He also enjoyed listening to music. He will be dearly missed by his family and friends. Bobby is survived by his beautiful daughter, Elizabeth Arianna Pope who he loved dearly, of Water Valley, MS; his mother, Brenda Joyce Pope, of Water Valley; his two sisters, Anita McAulay, of Oxford, MS, and Ella Shantel Pope, of North Dakota; and his two nephews, Hayden McAulay and Wyatt Shipp. Bobby was preceded in death by his father, Johnny Edward Pope. Please leave online condolences on the Tribute Wall at www.colemanfuneralhome.com.

The family of Bobby Edward Pope created this Life Tributes page to make it easy to share your memories.

Send flowers to the Pope family.