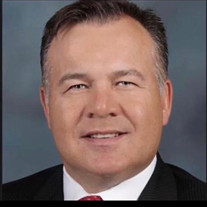 Bradley Keith Brown, 53, passed away April 30, 2022, in Southaven, MS. A visitation will be held Saturday, May 7, 2022, from 11:00 a.m. to 1:00 p.m. at Coleman Funeral Home of Southaven (626 Star Landing Road East, Southaven, MS 38672). A funeral service will immediately follow at 1:00 p.m., also at Coleman Funeral Home of Southaven. Hon. Danny Glover will officiate. Coleman Funeral Home of Southaven is in charge of arrangements. Bradley was born December 02, 1968, in Wynne, AR. He was a beloved husband and father. He was a huge Arkansas Razorbacks fan, and lifelong pitching coach for his dearest daughter Kennedy. He was actively involved in the Special Olympics of Greater Memphis and Big Brothers/Big Sisters of Memphis program. Mr. Bradley is survived by his wife of 20 years, Joanna Webb Brown of Southaven; his daughter, Kennedy Elaine Brown of Southaven; his brother, David (Jennifer) Brown, Jr. of Clarksville, TN; his father, David Brown, Sr. of Heber Springs, AR; a nephew who adored him, Truman Brown of Clarksville; and two nieces who will miss him dearly, Hadley Shepherd and Macy Brown, both of Clarksville. He also leaves behind a host of nieces and nephews, as well as many beloved friends. Mr. Brown was preceded in death by his mother, Kay Seaton Brown. Donations and memorial contributions in honor of Mr. Bradley may be made to Special Olympics of Greater Memphis, 1355 Lynnfield Road Suite 273 Memphis, TN 38119. Online condolences may be left on his Tribute Wall at www.colemanfuneralhome.com.

The family of Bradley Keith Brown created this Life Tributes page to make it easy to share your memories.

Send flowers to the Brown family.