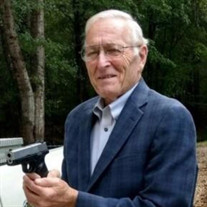 Coleman Funeral Home of Olive Branch Charles Lynn Cole, 84, of Red Banks, MS passed away on Friday, February 4, 2022. A memorial service will be held on Saturday, March 12, 2022 at 2:00 p.m. at Olive Branch Seventh-Day Adventist Church (10469 College Road Olive Branch, MS. Lynn was born on January 17, 1938 in Friendship, TN. He was Head Elder of the Olive Branch Seventh Day Adventist Church. Lynn served in the United States Army. He was an expert small engine repairman and always had a part time job while working on the Memphis Fire Department. Lynn even went to service school in Belarus, Russia to work on Belarus tractors. He loved his Lord and Savior. He was a devoted father, grandfather and great-grandfather. He was a devoted husband and caretaker to his wife, Doris Virginia Cole, until her death in 1999 and to Gloria Cole, until his recent death. Lynn loved being out in nature, walking in the woods, fishing and having a big garden. He was a motorcycle enthusiast. He and his wife, Gloria, loved to work puzzles. Lynn was an animal lover and taught his girls about animals. Lynn is survived by his wife, Gloria Cole of Red Banks, MS; daughters, Terrice Enochs (Tom) and Cynthia Cole of Red Banks; step-daughter, Beryl Castania of Killeen, TX; grandson, Jacob Crafton (Natalee) of Collierville, TN and several great-grandchildren. Lynn was preceded in death by his parents, Jane and John Cole and sister, Suzanne Cole. In lieu of flowers, memorials can be made in honor of Charles Lynn Cole to Olive Branch Seventh Day Adventist Church (www.olivebranchms.adventistchurch.org).

The family of Charles Lynn Cole created this Life Tributes page to make it easy to share your memories.

Send flowers to the Cole family.