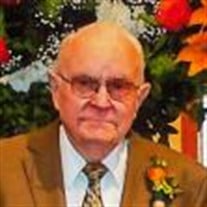 Coleman Funeral Home of Oxford Charles Wadelow Conner, 88, passed away on December 20, 2021, in Tupelo, MS. A visitation will be held Thursday, December 23, 2021, from 12:00 p.m. to 2:00 p.m., at Yellow Leaf Baptist Church in Oxford, MS. A service will be held immediately following at 2:00 p.m., also at Yellow Leaf Baptist Church. Interment will be at Yellow Leaf Cemetery. Bro. John Davis and Bro. Jerry East will officiate. Coleman Funeral Home of Oxford is in charge of arrangements. Mr. Wade was born to the late Owen Nixon and Dovie Conner in Oxford, MS. He was married to Myra Conner for 68 years. Mr. Wade is described by his family as being a loving father, faithful husband, and a wonderful provider. He retired from the Post Office at the University of Mississippi and then again retiring from the Oxford City School District as a bus driver, two jobs of which he loved. Mr. Wade also enjoyed farming and working his cows until 2011 when a tornado destroyed his fences. But above all things, he loved his family and especially his grandchildren. Mr. Wade was a member at Yellow Leaf Baptist Church and faithfully served as a deacon from 1978 to 2017. He will be dearly missed by all those that loved and cherished him. Mr. Wade is survived by his wife of 68 years, Myra Conner, of Oxford, MS; his children, Charles (Colleen) Conner, Dianne (Tommy) Sturdivant, Dwight (Marla) Conner, and Owen (Cathy) Conner, all of Oxford; eight grandchildren; thirteen great-grandchildren; and two sisters, Janet Downs and Martha Woolfolk, both of Oxford. He was preceded in death by his parents, Owen Nixon and Dovie Conner; and his daughter, Patricia Ann Conner; and his siblings, Nixon Conner, Richard Conner, Frank Conner, and David Conner. In lieu of flowers, donations can be made known to the Yellow Leaf Cemetery Fund (c/o Martha May 221 Highway 334, Oxford, MS 38655) or The Gideons International (https://www.gideons.org/donate/). Please leave online condolences on his Tribute Wall at www.colemanfuneralhome.com.

The family of Charles Wadelow Conner created this Life Tributes page to make it easy to share your memories.

Send flowers to the Conner family.