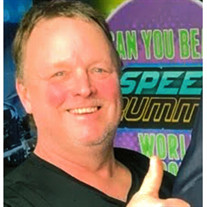 Coleman Funeral Home of Olive Branch Charles Darren Farrow, 53, of Olive Branch, MS, passed away Wednesday, June 10, 2020. A visitation will be held on Tuesday, June 16, 2020, from 1:00 p.m. to 2:00 p.m. at Coleman Funeral Home (6815 Parkview Blvd, Olive Branch, MS) with a memorial service following at 2:00 p.m. in the chapel. Coleman Funeral Home of Olive Branch is in charge of the arrangements. Charles Darren Farrow was born on September 23, 1966 in Memphis, TN. He was a member of Goodman Oaks Church of Christ in Southaven, MS, and the Olive Branch Church of Christ. Charles was known to be an extremely hard worker. He could fix absolutely anything and enjoyed every minute of it as well. Charles also loved helping others. His world was his family, especially his grandchildren. He was a wonderful, God-fearing man, and he will be truly missed by all who knew him. Charles Farrow is survived by his daughters, Christina Megan (Tommy) Garner of Hernando, MS; Taylor Mechelle Farrow of Southaven, MS, Charli Ray-Ann Farrow of Southaven, MS; Niki Glankler (Carl Boshers) of Southaven, MS; Mickey (Kenny) Dennison of Memphis, TN; son, Michael Rutherford of Hernando, MS; mother, Juanita “Nita” Cape of Olive Branch, MS; granddaughter, Graham Garner of Southaven, MS; grandsons, Ethan Jones of Southaven, MS, Dalton Garner of Hernando, MS and Elijah Edwards of Southaven, MS; brother, Jesse (Trudy) Cape of Vidalia, GA; nephew, Flynn Cape of Vidalia, GA. Charles Darren Farrow was preceded in death by his father, Charles Minor Farrow; and brother, Chris Farrow. Donations and memorials in honor of Charles Darren Farrow may be made to the Children’s Diabetes Organization (www.childrensdiabetesfoundation.org). Online condolences may be left on the Tribute Wall at www.colemanfuneralhome.com.

The family of Charles Darren Farrow created this Life Tributes page to make it easy to share your memories.

Send flowers to the Farrow family.