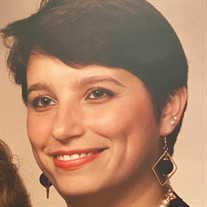 On Saturday, December 4th, Claudia Ballard Hervert peacefully passed away at Baptist Memorial Hospital - Desoto. She was 55. Claudia was born on December 28th, 1965 in Tettnang, Germany. With her father serving in the Air Force, she and her family lived in several cities and countries. The Domi family settled in Newport News, VA where she graduated from Menchville High School in 1983. She later married Michael Ballard and had two beautiful children, her “favorite first-born” and her “prince-sass.” Claudia spent the majority of her professional career working for the United States Navy. She was known there for her quirky personality, warm smile, and love for the beach. Her love for the beach inspired hobbies such as collecting seashells and even becoming a certified scuba diver. In 2019, Claudia married John Hervert. They enjoyed traveling to different cities with John’s Shrine, The Al Chymia Shrine - Memphis. Claudia also enjoyed spending time with John’s Vietnam War combat buddies. Claudia is survived by her husband, John Hervert, stepson, Brian Hervert, stepdaughter, Rena Ivanich, and step grandson, Tommy Hervert; her sisters: Lynn Lawson (Scott Lawson) and Deanna Domi; her son, Landen Ballard (Hailey Ballard); her daughter, Sydney Ballard; and her grandchildren: Consiglia, Asher, and Katelyn. Claudia was preceded in death by her father, Albert James Domi, and mother, Consiglia Leone Domi. The family will receive friends on Monday, December 20th at Coleman Funeral Home in Southaven, MS from 11 am to 1 pm. A reception is to follow at Boscos Restaurant and Brewing Company in Midtown Memphis at 2:30. In lieu of flowers, please consider donating to organizations honoring Claudia and/or her parents: In honor of Claudia, The Anxiety and Depression Association of America In honor of her father, Albert, The National Pancreas Foundation In honor of her mother, Consiglia, The Scleroderma Foundation

On Saturday, December 4th, Claudia Ballard Hervert peacefully passed away at Baptist Memorial Hospital - Desoto. She was 55. Claudia was born on December 28th, 1965 in Tettnang, Germany. With her father serving in the Air Force, she and her... View Obituary & Service Information

The family of Claudia Melanie-Ann Ballard Hervert created this Life Tributes page to make it easy to share your memories.