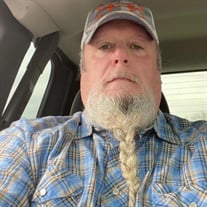 Coleman Funeral Home of Southaven Mr. David Vaughn, 58, passed away Friday, May 14, 2021 at his home. Friends and family are invited to a memorial service that will be held at 7:00 p.m. on Friday, May 21, 2021, at Coleman Funeral Home of Southaven, 626 Star Landing Road, East, Southaven, MS 38672. Visitation with the family will be 5:00 pm – 7:00 p.m. with a memorial service at 7:00 p.m. David truly appreciated nature and could usually be found outside, with Mack by his side. He enjoyed the quiet and sportsmanship of hunting, and would hunt year-round, no matter the season. Mr. Vaughn had an analytical mind and an uncanny ability to repair almost anything. He usually had some type of project, anything from automobiles to electrical work which he was rebuilding. Mr. Vaughn is survived by his loving wife, Audrey Lea Vaughn of Southaven, MS; his two sons, Jared (Shannon) Vaughn and Chet Vaughn, both of Piggott, AR; his two daughters, Andrea Gross of Southaven, and Deesha (Chris) Baldwin of Independence, MS; twelve grandchildren, two great grandchildren, his mother, Glenda Crossfield of Piggott; his sister, Vicky Johnston of Strayhorn, MS; his nephew Tyler Johnston of Strayhorn, and his furbaby Mack. Mr. David Lane Vaughn was preceded in death by his father,Earl “Bud” Vaughn. David Vaughn will truly be missed by those who loved him and knew him. Online condolences may also be left on his Tribute Wall at www.colemanfuneralhome.com. If you are unable to attend the memorial service in person, you may also view the service online at the same site. A link will appear on his tribute page on the day of the service for access.

The family of David Lane Vaughn created this Life Tributes page to make it easy to share your memories.

Send flowers to the Vaughn family.