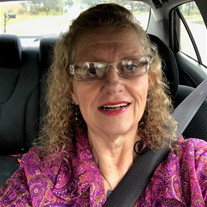 Coleman Funeral Home of Southaven Debra Elaine Hollingsworth, 61, passed away Thursday, April 21, 2022, at her residence in Horn Lake, MS. A memorial service will be held at a later date. Coleman Funeral Home of Southaven is in charge of arrangements. Debra was born October 10, 1960, in Iuka, MS. She was a devoted wife, mother, and grandmother. She enjoyed visiting amusement parks with her grandchildren and would spend hours on end watching their faces light up with joy and excitement. Her family described her as being the most selfless and giving person on the planet. She worked at the Children’s homes over the years as a foster parent. She always put other’s needs before her own. Mrs. Debra was a member of Southaven Church of Christ and loved her church dearly, as well as her Lord and Savior, Jesus Christ. She was very strong willed and had the biggest heart. In her free time, she enjoyed riding motorcycles. Mrs. Debra is survived by her husband, John Hollingsworth, Sr. of Horn Lake; her two sons, John (Eunice) Hollingsworth, Jr. of Munford, TN and Billy Hollingsworth of Horn Lake; her two daughters, Sarah (Frank) Hechavarria of Horn Lake, and Tricia Wright of Horn Lake; six grandchildren, Kelce Hollingsworth of Pope, Robert Sisk of Horn Lake, McKayla Sisk of Horn Lake, Christian Hechavarria of Horn Lake, Kayce Hollingsworth of Munford, TN, and Isabella Wright of Horn Lake; one great-grandson, Adrianna Hollingsworth of Pope; and one brother, Ricky Carlisle of Horn Lake. Mrs. Debra was preceded in death by her parents, Clifford Carlisle and Juanita Carlisle. Donations and memorial contributions in honor of Mrs. Debra Hollingsworth may be made to Le Bonheur Children’s Hospital (501 St. Jude Place, Memphis, TN 38105 or www.stjude.org). Online condolences may be left on her Tribute Wall at www.colemanfuneralhome.com.

The family of Debra Elaine Hollingsworth created this Life Tributes page to make it easy to share your memories.

Send flowers to the Hollingsworth family.