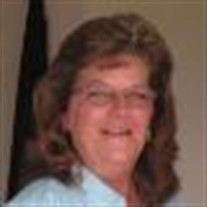 Coleman Funeral Home of Southaven Debra Leona Lahmon, 56, passed away Monday, February 22, 2021, at Baptist Memorial Hospital Desoto, where she spent her final days surrounded by her loving family. Visitation will be Wednesday, February 24, 2021, from 5:00 p.m. to 8:00 p.m. at Coleman Funeral Home of Southaven (626 Star Landing Road East, Southaven, MS 38672). A funeral service will be Thursday, February 25, 2021 at 11:00 a.m., also at Coleman Funeral Home of Southaven. Interment will follow at Lebanon Cemetery (8691 Bethel Rd, Olive Branch, MS 38654). Coleman Funeral Home of Southaven is in charge of arrangements. Debbie was an incredibly strong woman, who could be best described as a spitfire. She was a tough yet compassionate woman that was always honest with letting you know exactly where you stood with her. She never hesitated to sacrifice for her closest friends and family, as she would give anything she had, to help those that needed her help the most. She was an extremely devoted mother who loved her children beyond all measure, and if possible, loved her grandchildren even more. She could often be found on the bleachers watching her grandkids play ball. Debbie was a huge fan of her grandkids teams, White Sox baseball and DC Sox softball. Debbie is survived by her devoted husband of 37 years, Jimmy Lahmon of Horn Lake, MS; two daughters, Kimberly Lahmon and Taylor Perkins both of Horn Lake; three sons, Michael (Kari) Lahmon of Holly Springs, MS; Allen (Kacey) Lahmon of Horn Lake; Cody (Shelby) Lahmon of Horn Lake; four granddaughters, Paige, Chloe, Annabelle, and Callie. As well as three grandsons, Cameron, C.J., and Jackson. She was also survived by one brother, Sandy Perkins of Lagrange, GA. Debbie was preceded in death by father, Malcolm Perkins; mother, Shirley Ross Perkins; and brother, Lee Perkins. Online condolences may be left on her Tribute Wall at www.colemanfuneralhome.com.

The family of Debra L. Lahmon created this Life Tributes page to make it easy to share your memories.

Send flowers to the Lahmon family.