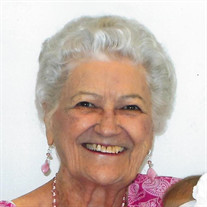 Coleman Funeral Home of Olive Branch Dorma Lee Tims (Damron), 95, of Olive Branch, MS went to be with the Lord, on Saturday, March 5, 2022, at home surrounded by her family. She was born on July 1, 1926 in Cherry Valley, AR, the daughter of Harry and Tarlie Strange Damron. She married Henry Lee Tims on May 6, 1966. Mrs. Tims spent most of her life residing in Byhalia, MS. She lived many years with her daughter Melony and her husband Brandon along with her four grandchildren, Gabriel, Noah, Cana & Eden. Until recent years, when her health failed she loved to work in her garden and yard, and travel with her family on vacation. For the last few years her favorite pastime was spending hours coloring. She was a member of First Baptist Church of Byhalia for over 50 years where she enjoyed serving with her friends and family until her health no longer allowed. She worked as a seamstress, homemaker and during WWII assembled 500lb bombs in a munitions plant in Huntsville, Al. Dorma is survived by three daughters: Donna Smith and husband Bob of Ecru, MS and grandchildren: Cindy Bullion- LaWarre and Angela Miller Christal Simpson and husband Jeff of Byhalia and grandchildren: Damron Simpson and Jacob Simpson Melony Tims-Lail and husband Bandon of Olive Branch and grandchildren: Gabriel Lail, Noah Lail, Cana Lail and Eden Lail Two Sisters: Ella Mae “Pete” Ross of Cherry Valley, and Barbara Ann Ridge of Weiner, AR Two Brothers: Henry Damron and Herman Damron, both of Cherry Valley As well as numerous great grandchildren and great-great grandchildren She was preceded in death by her husband Henry Lee Tims, parents Harry and Tarlie Damron , two brothers Willard Damron and Clifford Damron, four sisters Aileen Brooks, Burma Spencer, Lorene Whitehead and Irma Jones, as well as one grandson Scott Bell. She is also survived by four stepchildren: Charles Henry Tims of Memphis, TN, Jerry Tims and wife Donna of Napoleonville, LA, Robert Tims and wife Angie of Kansas City, KS and Suanne Aguirre of Olive Branch The family will receive friends on Thursday, March 10, 2022 from 10:00 a.m. until 11:00 a.m. with a funeral service following at 11:00 a.m. at First Baptist Church of Byhalia. Interment will be at Byhalia Cemetery. Pastor Leland Johnson will officiate. Flowers are welcome, and any other memorials can be sent to the Building and Grounds Fund at First Baptist Church of Byhalia. (2555 Church Street, Byhalia, MS 38611)

Coleman Funeral Home of Olive Branch Dorma Lee Tims (Damron), 95, of Olive Branch, MS went to be with the Lord, on Saturday, March 5, 2022, at home surrounded by her family. She was born on July 1, 1926 in Cherry Valley, AR, the daughter of... View Obituary & Service Information

The family of Dorma Damron Tims created this Life Tributes page to make it easy to share your memories.

Send flowers to the Tims family.