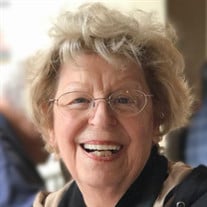 Elizabeth Patricia Morse, 81, passed away on Sunday, January 23, 2022, in Oxford, MS. Coleman Funeral Home of Oxford is in charge of arrangements, but no services are planned at this time. Elizabeth was born in Vancouver, British Columbia, Canada to the late Mel and Elizabeth Chater. She was married to the late Dan Batey Morse. Elizabeth was described by her family as a loving soul with contagious energy that would light up any room. Her family fondly remembers her doting personality and the elegance with which she always carried herself. Elizabeth’s passions were reading and dancing. She had a vast library and was always searching for the next book. As a teenager, she had the privilege of attending school at the Royal Ballet of England, which started a 60-year career in dance, and included owning a studio and working as an instructor of dance in the University of California system. She exuded elegance and professionalism in every aspect of her life. Elizabeth is survived by her children, Mike (Donna) Slagle, of Ocean View, Hawaii, Mimi Slagle-Morse, of Oxford, Mississippi, and Mel (Lewanda) Morse, of Oxford, Mississippi; five grandchildren, Emily Morse, Allie Morse, Holly Lowe (Rob) Willis, Shawn (Alexis) Lowe, Terry (Heather) Ward and; three great grandchildren, Abraham Lowe, Bleu Willis, and Paige Ward; and her siblings, Eve (Randy) Blackwood, of Montana, and Kerry (Lynn) Chater, of Brentwood, Tennessee. She was preceded in death by her husband, Dan Batey Morse; and her parents, Mel and Elizabeth Chater. Memorials can be made to the Leap Frog Program of Oxford. Please leave online condolences on her Tribute Wall at www.colemanfuneralhome.com.

Elizabeth Patricia Morse, 81, passed away on Sunday, January 23, 2022, in Oxford, MS. Coleman Funeral Home of Oxford is in charge of arrangements, but no services are planned at this time. Elizabeth was born in Vancouver, British Columbia,... View Obituary & Service Information

The family of Elizabeth Patricia Morse created this Life Tributes page to make it easy to share your memories.

Send flowers to the Morse family.