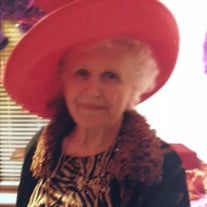 Coleman Funeral Home of Southaven Mrs. Florine Ransome McAfee, 103, of Southaven, MS, passed away on May, 14, 2021. A visitation will be Friday, May 21, 2021, from 10:00 a.m. to 11:00 p.m. at Coleman Funeral Home of Southaven (626 Star Landing Rd., East, Southaven, MS 38672). A funeral service will follow at 11:00 a.m., also at Coleman Funeral Home of Southaven. Interment will be at Forest Hill South Cemetery (2545 E. Holmes Rd., Memphis, TN), directly after the service. Coleman Funeral Home of Southaven is in charge of arrangements. Mrs. McAfee was the wife of the late John William McAfee, Sr., her husband of 67 years. Florine attended Southside High in Memphis. Before retiring she was owner of Gifts & Things, an active co-owner and diligent bookkeeper for Midtown Photo Service, and Mid-South Theatre and Motion Picture Supply Co., all in Memphis. Florine will truly be missed by those who loved her and knew her. Mrs. Florine Ransome McAfee leaves behind her five children, John William McAfee, Jr. of Hernando; Rose Phillips of Muscle Shoals, AL; Marilyn (Larry) Carlisle of Southaven, MS; Michael McAfee of Bartlett, TN; and Vicki Bitter of Hernando, MS; two grandsons, Larry Carlisle of Southaven and Jeff McAfee of Mount Airy, NC. Florine Ransome McAfee was preceded in death by her husband, John William McAfee, Sr., her parents, James A. Ransome and Lillian Sherman Ransome; two grandsons, Johnny McAfee of Hernando and Troy Bitter of St. Thomas, Virgin Islands. Online condolences may be left on her Tribute Wall at www.colemanfuneralhome.com. If you are unable to attend the funeral services, you may also view the service online at the same site. A link will appear on her tribute page on the day of the service for access.

The family of Florine McAfee created this Life Tributes page to make it easy to share your memories.

Send flowers to the McAfee family.