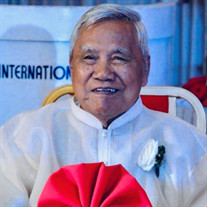 Coleman Funeral Home of Southaven Mr. Francisco Anacleto Ulanday, 85, passed away Friday, August 13, 2021, at Baptist Memorial Hospital in Southaven, MS. Visitation will be Saturday, August 21, 2021, from 3:00 p.m. to 5:00 p.m. at Coleman Funeral Home of Southaven (626 Star Landing Rd. East, Southaven, MS 38672). A funeral mass will immediately follow at 5:00 p.m., also at Coleman Funeral Home of Southaven. Deacon Ted Schreck will officiate. Coleman Funeral Home of Southaven is in charge of arrangements. Mr. Francisco was born on July 13, 1936, in the Philippines. He was an extremely dedicated to his work and was always known to be a hard worker. He dedicated over 20 years of his life working as a stocker at Williams-Sonoma. Francisco was known to be a very hard-nosed man. He enjoyed raising different types of chickens and spending time at his beach home. However, he loved nothing more than his family. He will truly be missed by all who knew him. Mr. Francisco is survived by his loving wife, Luz Ulanday of Olive Branch, MS; eight daughters, Lucita Ulanday of Southaven, Teresa (Ariel) Navales of San Marcos, CA, Nora Burts of Olive Branch, Elma (Bob) Luehman of Minnesota, Digna (Glen) Petty and Corazon Ulanday, both of Tennessee, Jocelyn Aronen of Japan, and Angelita (Edwin) Romatan of the Philippines; three sons, Anacleto (Rowena) Ulanday, Jr. of Olive Branch, Arnel (Aurora) Ulanday of Tennessee, and Bobby Ulanday of the Philippines; and a host of grandchildren, great-grandchildren, and extended family members. Mr. Francisco was preceded in death by his parents, Silverio Ulanday and Brenda Ulanday; three brothers, Leonardo Ulanday, Daniel Ulanday, and Claro Ulanday; and two sisters, Juliana Corpus and Emma Ymasa. Online condolences may be left on his Tribute Wall at www.colemanfuneralhome.com.

The family of Francisco Anacleto Ulanday created this Life Tributes page to make it easy to share your memories.

Send flowers to the Ulanday family.