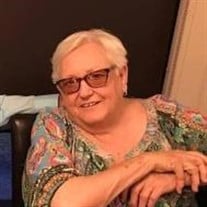 Coleman Funeral Home of Oxford Mrs. Frankie Geneva Weeden, 79, passed away at her home in Oxford, MS. A visitation will be held Thursday, December 24, 2020, from 11:00 a.m. to 1:00 p.m. at Coleman Funeral Home of Oxford. A funeral service will be held immediately following at 1:00 p.m. also at Coleman Funeral Home of Oxford (601 Commerce Parkway Oxford, MS 38655). Interment will be at Garden of Memories Cemetery (265 Highway 7 North Oxford, MS 38655). Bro. Tommy Williamson will officiate. Pallbearers will be: Hunter Buntyn, Zachary Buntyn, Chris Hancock, Terry Holden, John Sandifer and Dennis Weeden. Coleman Funeral Home of Oxford is in charge of arrangements. Geneva was born to the late Lee and Georgia Murray. She married her high school sweetheart Leighton Gates Weeden in Oxford, MS, on April 17, 1957, and they have been married for an amazing 63 years. They moved to Memphis, TN, and she worked for General Electric’s Memphis Lamp Plant for 32 years. After retiring, Geneva stayed at home, raising her granddaughters. Geneva was a member of First Baptist Church of Abbeville and supported the TeamKid discipleship program at Harmontown Baptist Church. She is described by her family as being the most courageous, giving, strong-willed, dependable, and loving individual they know. She put God and family first and was known to all as Granny. Geneva is survived by her husband, Leighton Gates Weeden, of Oxford; her daughter, Tracie Lee Weeden, of Oxford; her granddaughters, Stephanie LeAnne (Chris) Hancock, of Oxford and Angela Nicole (Jarrod) Golden, of Madison, MS; her great-grandchildren, Zachary Robert Buntyn, Hunter Gates Buntyn, Alex Joseph Hancock, Gracie Jo Hancock, and Leighton Ashley Golden; and two sisters, Martha Ann Allen, of Tupelo, MS, and Sarah Earnestine Holden, of Pinedale, MS. Geneva was preceded in death by her parents, Lee and Georgia Murray; one brother, Jerry Lee Gafford; and one daughter, Tammy Jo McOwen. The family would like to thank the staffs of both Sta-Home Hospice and Kindred Home Health and for their loving care and compassion. In lieu of flowers, donations and memorials in honor of Mrs. Frankie may be made to the American Diabetes Association (https://www.diabetes.org/donate) or First Baptist Church of Abbeville (15 East Long Street Abbeville, MS 38601). Please leave online condolences on the Tribute Wall at www.colemanfuneralhome.com.

The family of Frankie G. Weeden created this Life Tributes page to make it easy to share your memories.

Send flowers to the Weeden family.