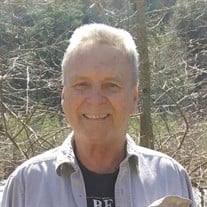 Coleman Funeral Home of Olive Branch George Harley Beard, Jr., 74, of Byhalia, MS, passed away on Saturday, November 20, 2021. The family will receive friends on Wednesday, December 1, 2021 at Meadowbrook Baptist Church from 5:00 pm until 7:00 pm. The funeral service will be held the following day on Thursday, December 2, 2021 at 10:00 am also at Meadowbrook Baptist Church. The burial will be at West Tennessee State Veterans Cemetery. Brother Oscar Geeslin will officiate. George was born on December 14, 1946 in Old Fort, TN. George served his country honorably in the United States Army and was very proud of his service. An incredibly smart man, George graduated at the top of his class in Aviation School where he received his A&P license to work on airplanes. He enjoyed working on old muscle cars and would mentor others through working on cars, explaining everything he did as he went along in great detail. He was very passionate about it and could tell you every last detail about any classic muscle cars. For George, his music was his therapy. He spent at least an hour a day playing his guitar. George was also a huge fan of The Beatles. He loved everything about the beach, especially sunsets over the water, and always said he wanted to move there one day. His mother wanted him to be named Jerry and many people began calling him “Jerry,” but he earned the name “Peepaw” from his grandchildren. He was an avid fan of UT Football, even when they disappointed him. He loved to draw and was an excellent artist, and even attended class for art at Memphis State University. He loved his family and was devoted to each one. He was incredibly proud of all five of his sons. Though he was not a pet person, he adored Kitty the cat. He and Melinda loved each other for 12 and a half years and had been very happy together. George is survived by his fiancé, Melinda Lee Vickers of Byhalia; sons, Jerry Beard of Byhalia, Michael Beard (Theresa) of Sicklerville, NJ, Brandon Beard (Sharon) of Bartlett, TN, Ben Beard (Michelle) of New Orleans, LA, and Eric Schaefer of Memphis, TN; granddaughters, Madison Beard of Sicklerville, Marley Beard of Bartlett, Ajahna Schaefer of Chattnooga, TN, and Kailee Schaefer of Memphis; and grandsons, Christian Beard of Philadelphia, PA, Michael Beard of Sicklerville, Donovan Beard of Westamptom, NJ, and Jackson Beard of Bartlett. George is preceded in death by his parents, Anna Lou and George Harley Beard, Sr. In honor of George Beard’s service to our country, the flag of the United States Army will be flown at Coleman Funeral Home on the day of the services. Online condolences may be left at his tribute wall at www.colemanfuneralhome.com.

The family of George Harley Beard, Jr. created this Life Tributes page to make it easy to share your memories.

Send flowers to the Beard, family.