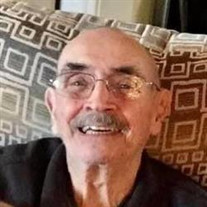 Coleman Funeral Home of Oxford Mr. George Eugene Michaels, age 84, passed away Saturday August 15th, 2020, in Oxford, MS. There will be a private service announced at later time. Coleman Funeral Home of Oxford is in charge of arrangements. George was born to the late Charles and Hilda Michaels in 1935. He served in the US army in the 10th Mountain division. After the Military he went on to receive his associates Degree. He was a career man who worked at Borg Warner, Reliance, Alto, Lanham Machinery, and Gemini Equipment Company before opening his own company, Eastern Bakery Equipment Company. George was a character: feisty, dedicated, funny, and independent. If you didn’t walk away from him laughing, you didn’t meet George. He had a great sense of humor, which lives on in his family today. He taught his family about hard work and dedication. If you needed a friend George was your guy. George loved Scuba diving, going to the Caribbean and work. Younger George actually was a competitive roller-skater. His family will miss his quick wit and caring manor. George is survived by his two daughters; Dana A Poe (Jay Poe) of NV, Diane A Smith (Ronald Smith) of MS; four grandchildren, Rachel Okerman of CA, Jonny Poe of CA, Ryan Smith of TX, Samantha Smith of Oxford, MS; two great-grandchildren, Hudson Shoffner and Jason Okerman. He is preceded in death by both parents; his sister, Sally A. Tedesco; and his brother, Charles J. Michaels Jr. In lieu of flowers, donations can be made to the VA (https://www.volunteer.va.gov/apps/VolunteerNow/). Please leave online condolences on the Tribute Wall at www.colemanfuneralhome.com.

The family of George Eugene Michaels created this Life Tributes page to make it easy to share your memories.

Send flowers to the Michaels family.