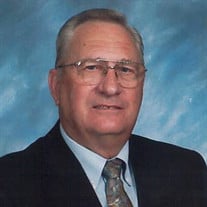 Coleman Funeral Home of Oxford Gerald Wayne Brown, 82, passed away Wednesday, April 7, 2021, at his home in Lafayette Springs. A visitation will be held Friday, April 9, 2021, from 11:00 a.m. to 1:00 p.m. at Bellevue Baptist Church (Highway 6 Thaxton, MS 38871). A service will immediately follow at 1:00 p.m. also at Bellevue Baptist Church. Bro. David Ard will officiate. Coleman Funeral Home of Oxford is in charge of arrangements. Gerald was born to the late J. D. and Rachel Brown. He attended Itawamba Junior College and later went on to work for Georgia Pacific as a Shipping Supervisor for over 20 years. Gerald was married to Betty Ruth Brown for 61 years, and they were members of Bellevue Baptist Church where he had served as a deacon. He and Mrs. Betty thoroughly enjoyed working with the youth, often hosting youth retreats. Mr. Gerald was a very godly man who always put God first and then his family. He didn’t just talk the talk but he walked the walk. With his strong faith in God came his great love for his family. He held a fierce love for them and especially his grandchildren. His life revolved around them, often consuming it. He enjoyed riding the four wheeler with his grandchildren, often making loops on loops with them. About a year ago, Mr. Gerald broke his leg, but that didn’t stop him from riding the four wheeler. He proceeded to get in a small trailer that was then pulled behind it. Mr. Gerald enjoyed life to the fullest. Not only did he love his grandchildren but his love for Mrs. Betty was unconditional. Being married 61 years, they spent many precious and memorable times together. They loved to travel out west, often making one trip a year. Mr. Gerald was a very selfless, independent man who would help anyone but he didn’t like asking for help. In the last couple of years with his battles with cancer and his broken leg, often people would bring food over and offer their help. Being the selfless man he was, he would always refuse it but often accepting it later. Mr. Gerald was known as “Mr. Fix-It” around his family and neighborhood, especially when it came to cars. He loved working with his hands, fixing anything. He also spent many days hunting and piddling. He was also a very patriotic person who loved his country. Mr. Gerald is survived by his wife of 61 years, Betty Ruth Brown; his daughter, Sandra (Larry) Smith, Thaxton, MS; his grandchildren, Jeremy Smith, Josh Smith, and Beka Smith; his great-grandchildren, Emry Smith, Ella Ruth Smith, and Henley Grace Smith; his sister, Kara (Donald) White, of Thaxton, MS; and his brother, Dexter (Barbara) Brown, of Oxford, MS. Mr. Gerald was preceded in death by his parents, John D. and Rachel Brown. In lieu of flowers, donations can be made to St. Jude Children’s Research Hospital (https://bit.ly/31XLCPh). Please leave online condolences on the Tribute Wall at www.colemanfuneralhome.com.

The family of Gerald Wayne Brown created this Life Tributes page to make it easy to share your memories.

Send flowers to the Brown family.