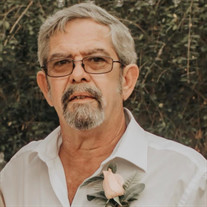 Coleman Funeral Home of Southaven Harold Eugene Wilson, 60, passed away December 12, 2021, at his home surrounded by his loving family. A visitation will be held Thursday, December 16, 2021, from 5:00 p.m. to 7:00 p.m. at Coleman Funeral Home of Southaven (626 Star Landing Rd. East, Southaven, MS 38672). A second visitation will be held on Friday, December 17, from 12:00 p.m. until 1:00 p.m. A funeral service will immediately follow at 1:00 p.m., also at Coleman Funeral Home of Southaven. Interment will be in DeSoto Memorial Gardens (630 Star Landing Rd. East, Southaven, MS 38672). Coleman Funeral Home of Southaven is in charge of arrangements. Harold was born on April 26, 1961, in Kilmichael, MS. He loved SEC football, particularly Ole Miss, deer and squirrel hunting, fishing, and was incredibly devoted to his family. As a father of three girls, he was overly jubilant and joyful when he finally had a grandson. He was a devoted fan of NASCAR and camping. Mr. Wilson leaves his loving wife, of 36 years, Regina Wilson of Southaven; his three daughters, Valerie Karen Wilson (Joey) Johnson of Lake Cormorant, MS, Kyndl Nicole Wilson and Hannah Elaine (Tommy Cummings) Wilson, both of Southaven, MS; his four grandchildren, Ayden, Jenna, Kirby, Gabby, and one on the way; his parents, Boyce and Rebecca “MauMau” Wilson of Kilmichael; his two brothers Andy (Susie) Wilson of Kilmichael and Jeff Wilson of Tuscaloosa, AL and many, nieces, nephews, cousins, and extended family members and friends to cherish his memory. Mr. Wilson patriotically and loyally served in the United States Navy for six years. In honor of his service, the U.S. Navy flag will be flown at Coleman Funeral Home of Southaven on the day of his funeral service. Memorial contributions in Harold’s memory may be made to any local Veteran’s charity of the donor’s choice. Online condolences may be left on his Tribute Wall at www.colemanfuneralhome.com.

Coleman Funeral Home of Southaven Harold Eugene Wilson, 60, passed away December 12, 2021, at his home surrounded by his loving family. A visitation will be held Thursday, December 16, 2021, from 5:00 p.m. to 7:00 p.m. at Coleman Funeral Home... View Obituary & Service Information

The family of Harold Eugene Wilson created this Life Tributes page to make it easy to share your memories.

Send flowers to the Wilson family.