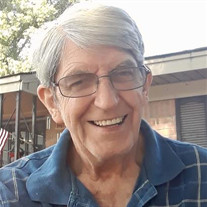 Coleman Funeral Home of Southaven It is with deep sorrow to announce the death of James Harrell Ables of Horn Lake, MS, 74. He passed peacefully at Baptist Memorial Hospital Desoto on Thursday, March 3, 2022 @ 6:04 pm, leaving to mourn family and friends. A memorial service will be held Saturday, March 12, 2022, from 11:00 a.m. to 1:00 p.m., at Twin Lakes Baptist Church (5900 Twin Lakes Dr., Horn Lake, MS 38637). Coleman Funeral Home of Southaven is in charge of arrangements. James was born on March 24, 1947, by his parents Ruebelle & Dewey Ables, in Holmes County, MS. James attended school in Holmes County and then joined the Army for a short while. He returned home and attended their local college, Holmes County College, in which he studied Auto Mechanics & Machining. He graduated college & pursued a career which led him to move to DeSoto County, MS to work in Memphis, TN. James & Brenda Ables were married on July 3, 1971. James & Brenda recently celebrated their 50th Wedding Anniversary. James loved his wife and then renewed his vow to Brenda whom he loved so dear. He will be remembered as being a great Christian man who loved his family and his Church Community. James was known as a humble man in his community; he was a long-time member of his church in which he served as Deacon at Twin Lakes Baptist Church as well as a Sunday school teacher. James was proud to be an American and enjoyed many activities with family and friends by gardening, camping, swimming, bike rides, walking in the outdoors and the infamous family reunions and cookouts. James loved to congregate; he shared many memories of his childhood and how he grew to the amazing man he became and as we know. He was patient and willing to help others, especially his family and children whom he put before himself. He was always a hardworking man and was dedicated to teaching as a Machine Shop Instructor at William R. Moore School of Technology aka Moore Tech. James retired from teaching of 30 years July 2014 and continued to keep busy by tinkering with his many projects such as small engines, lawnmowers, tillers, appliances, etc. James Harrell Ables is survived by his loving wife, Brenda Kay Ables of Horn Lake; his only son, Harrell James Ables of Senatobia; his only daughter, Shawna Kay Ables of Horn Lake; his only grandson, James Owen Ables of Senatobia; his daughter-in-law Kimbra (Walls)Ables of Senatobia; his siblings: brother, Tony Ables of Madison; brother, Lamar Ables of Southaven; brother, Dale Ables of Goodman; sister, Rachel Hankins of Laurel; along with his deceased sister, Fannie Jewel Siddon of Tunica; and his many nieces, nephews, great-nieces, great-nephews and cousins. Instead of flowers, the family is asking for help with his funeral expenses. All gifts can be made to Brenda Ables (5693 Chickasaw, Horn Lake, MS 38637). Online condolences may be left on his Tribute Wall at www.colemanfuneralhome.com.

The family of James Harrell Ables created this Life Tributes page to make it easy to share your memories.

It is with deep sorrow to...

Send flowers to the Ables family.