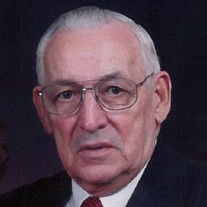 Coleman Funeral Home of Oxford James Robert Livingston, 93, passed away on Saturday, March 12, 2022. A visitation will be held on Wednesday, March 16, 2022, from 12:00 p.m. to 2:00 p.m., with a service immediately following at 2:00 p.m., at Coleman Funeral Home of Oxford. A graveside service will be held at Oxford Memorial Cemetery. Pastor Ryan Hoover will officiate. Coleman Funeral Home is in charge of arrangements. James was born to the late Lewis Joshua and Ina Mathis Livingston. He was remembered by his family for being a hard worker, known for his ability to fix about anything and for his willingness to help others. James worked at several automotive related jobs before serving as a police officer for the University Police Department. Afterwards, he opened Livingston Motor Parts in 1972 and ran that business successfully for over 35 years. James was a lifelong member of the VFW and was a member of the St. Andrews United Methodist Church for most of his adult life. He leaves his family with the memories of giving back to his community by being a helping hand to all those who ever needed assistance. In James’ early years, he was a member of the United States Army and served in the Korean War as a Platoon Sargent. His family and friends knew him as Mr. James, Mr. Livingston, JR, James Robert, Daddo, and Pawpaw James. His hobbies included quail hunting and gardening. James will be missed by all those who loved and cherished him. James is survived by his wife; Bessie Crouch Varner Livingston; his children, James Dennis Livingston, Robert Lynn Livingston (Tammy), Linda Livingston Rosenthal, Darrell Varner, Sr. (Lori), Joseph “Joe” Varner (Jennifer); his grandchildren, Kimberly Paige Livingston, Heather Lynn Livingston, James Richard Livingston, Kathleen Collier “Kaci” (Lukasz), Anne Lauren “Annie” Livingston, William Dennis Livingston, William Tyler Rosenthal, Justin Taylor Rosenthal, Kathleen Tatum Rosenthal, Darrell “DJ” Varner Jr. (Laura), Jodey Varner (Cory), Richard Price Varner (Samantha), Loura Varner, Rebecca Varner, Chance Gates, Dalton Sizemore, and Ray Sizemore; his great-grandchildren, Rilyn Varner, Lilyan Varner, Paisley Varner, James Varner, and Ridge Varner; and one sister; Virginia Livingston Edwards. He was proceeded in death by his wife of over 41 years, Kathleen Humphreys Livingston; his parents, Lewis Joshua and Ina Mathis Livingston; his siblings, Lewis Joshua Livingston, Jr. and Louise Livingston Freano; and one grandchild, Michael James Ryan Livingston. In lieu of flowers, donations can be made to St. Andrews United Methodist Church. Please leave online condolences on his tribute page at www.colemanfuneralhome.com

The family of James Robert Livingston created this Life Tributes page to make it easy to share your memories.

Send flowers to the Livingston family.