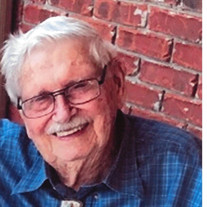 Coleman Funeral Home of Southaven James Thomas Reid passed away on September 12, 2021, at Mississippi State Veterans Home in Oxford, MS, where he had resided since April 1, 2021. He was born May 25, 1929, in New Albany, MS, to parents Thomas Emmett Reid and Lena Mae Spears Reid. The family moved to DeSoto County by 1940. He spent his youth in Eudora, MS, and graduated from Eudora High School in 1948. The story is that his lively portrayal of a character named Pete in a school play gave him the nickname Pete that endured throughout his life. After high school he worked one year for American Telephone and Telegraph Company, then entered the United States Navy on May 31, 1949, serving until August, 1955, on the aircraft carrier U.S.S. Midway as an Aviation Boatswain’s Mate and also as a Combat Aviation Crew member during the Korea War. He traveled the world while in the navy. Afterwards, he was a life member of both The American Legion and the Veterans of Foreign Wars. After military service he worked in the ready-mix concrete industry in Memphis before starting his own company, America Scale Company, which serviced, repaired, and calibrated large scales. His wife Inez Grove Reid, whom he married in 1962, served as bookkeeper. He retired in 2006, the year after her death, selling the company that still exists today in Forrest City, Arkansas. His many interests throughout a long life included fishing and hunting. He also owned sports cars and participated in rally racing in the ‘60s and ‘70s. In the ‘70s and’80s he was an EMT who volunteered during events in the Mid-South. He also was an active member of the Tia Piah Native American Society, loving American Indian history. After marrying his present wife Dolena MacDonald , he enjoyed singing as she played the piano. Their home in Nova Scotia, Canada, was a gathering place for a ceilidh, a social fellowship with Scottish folk music and dancing. Friends from the United States visited and enjoyed the warm welcome in their Canadian home where they lived six months of the year, returning to Snow Lake Shores in Mississippi for the other six months. He also enjoyed travel , especially with special friends from Ashland, MS, including Debbie Breedlove and Carlie and Rudolph Wilson. He is survived by his wife Dolena MacDonald Reid and her children Darlene (Donnie) MacLellan, Ronald (Jeanette) Roach, Billy (Leona) Roach, and Brian (Pat) Roach of Canada.; his brother Charles (Bonnie) Reid of Nesbit, MS; step-daughter Carolyn (Billy) Davis of California and her children Dirk(Natalie) Davis , Angela (Ray) Putulowski, Joey(Rachael) Davis, and Molly Davis; nephew Martin (Beth) Gable of Gadsden, AL; nieces Lanita (Don) Helms, Mary (Rickey) Pickens, Teresa (Mack) Wilcox, Cynthia (Floyd) Fiveash, Amy (Donny) Bishop, Jennifer (David) Jones and numerous great-nephews and great-nieces. He was preceded in death by his parents, his sister Mary Frances Reid Gable; his brother John Wallace Reid; and his former wife Inez Grove Reid. Services will be held on Friday, September 17, 2021, at Coleman Funeral Home in Southaven (626 Star Landing Rd. East, Southaven, MS 38672). Visitation will be from 10:00 a.m. to 11:00 a.m. with a Celebration of Life will immediately following at 11:00 a.m. The service will be live-streamed for family and friends who wish to view from their home. Burial will be at Forest Hill Memorial Park - Midtown (1661 Elvis Presley Boulevard, Memphis, TN 38106). Coleman Funeral Home of Southaven is in charge of arrangements. In honor of Mr. James Thomas Reid’s service to our country, the flag of the United States Navy will be flown at Coleman Funeral Home of Southaven the day of the services. Online condolences may be left on his Tribute Wall at www.colemanfuneralhome.com. This is also where you will find the link to the webcasting of his service.

Coleman Funeral Home of Southaven James Thomas Reid passed away on September 12, 2021, at Mississippi State Veterans Home in Oxford, MS, where he had resided since April 1, 2021. He was born May 25, 1929, in New Albany, MS, to parents Thomas... View Obituary & Service Information

The family of James Thomas Reid created this Life Tributes page to make it easy to share your memories.

Send flowers to the Reid family.