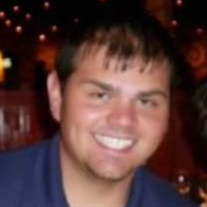 Coleman Funeral Home of Southaven Mr. James “Alan” Vinson, Jr., 36, passed away Monday, August 16, 2021 in DeSoto County, Mississippi. A visitation will be held Friday, August 27, 2021, from 2:00 p.m. to 4:00 p.m. at Coleman Funeral Home of Southaven (626 Star Landing Rd. East, Southaven, MS 38672). A funeral service will immediately follow at 4:00 p.m., also at Coleman Funeral Home of Southaven. Coleman Funeral Home of Southaven is in charge of arrangements. He was born in Memphis, Tennessee on January 1, 1985, with a smile that lit up the world and an innate ability to comfort and cheer others. His compassionate, Happy-Go-Lucky, and outgoing personality made everyone love him! He never ever met a stranger. Alan was a six-year veteran of the U.S. Army, where he earned numerous ribbons, medals, and badges for exceptional service to our country. His bravery was displayed in Afghanistan where he served in Air Traffic Control (ATC) and was awarded a Basic Aviation Badge, an Afghanistan Campaign Medal with a Campaign Star, and Army Commendation Medal, an Army Good Conduct Medal, a National Defense Service Medal, a Global War on Terrorism Service Medal, an Army Service Ribbon, an Overseas Service Ribbon, an Armed Forces Reserve Medal with Device, a Nato Medal, and two Combat Action Badges. Alan loved his family and was devoted to them. He was an outstanding uncle to his nieces, Heidi and Fallon, and his nephew, Ezra. He always gave them special attention, made time for them, and loved to play games with them, especially basketball and swimming. His brothers, Justin and Jason, knew him to be an exceptional brother, who would cook meals for family gatherings. He was able to prepare anything, but crafted particularly scrumptious steaks. In addition to cooking, Alan loved to eat and had a fondness for Mexican food and cook-outs. He was naturally gifted in sports and played football and baseball, and enjoyed fishing. Those who were able to know and love Alan, will truly feel his loss and miss his engaging personality as a social butterfly and heartfelt bear hugs. Mr. James “Alan” Vinson is survived by his devoted mother, Janet Margaret Smith of Nesbit; his pops, Jerry Lynn Smith of Nesbit; his two brothers, Justin Carlton Smith of Nesbit and Jason Lee (Rebecca Sides) Smith of San Diego, CA; his two cherished nieces, Heidi Lynn Smith of Olive Branch, MS and Fallon Alisia Smith of San Diego; his cherished nephew, Ezra Taylor Smith of San Diego; his godfather, William Thomas Parker, Jr. of Hernando, MS; his godmother, Becky (Steve) Wolverton of Byhalia, MS; and several beloved aunts, uncles, cousins and friends. Alan was preceded in death by his father, James Alan Vinson, Sr. Memorial Contributions may be made to the ASPCA https:/aspca.org/donate or The Wounded Warrior Project https:/woundedwarriorproject.org. Online condolences may be left on his Tribute Wall at www.colemanfuneralhome.com. In honor of Alan’s service to our country, the flag of the United States Army will be flown at Coleman Funeral Home of Southaven the day of the services.

The family of James "Alan" Vinson Jr. created this Life Tributes page to make it easy to share your memories.

Send flowers to the Vinson family.