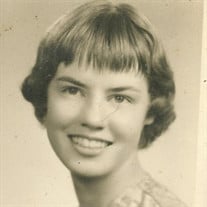 Coleman Funeral Home of Olive Branch Janet Mary Setler Bunting, 79, of Olive Branch, MS, passed away Tuesday, May 18, 2021. She went peacefully in her sleep after bravely battling a long illness. Janet was born on March 27, 1942 in Pittsburgh, PA, the third of five children. After graduating from Bethel Park High School in 1960, she went on to receive a B.S. in History from Wheeling College in 1963. Upon graduation, she married her college sweetheart and dedicated herself to raising their three daughters before pursuing an administrative career and volunteering her time to numerous organizations. She was fortunate to spend retirement traveling the world with her husband before settling in Olive Branch, MS to be near the grandchildren. Janet was a kind, caring and giving person. She was truly dedicated to her family, and very much in love with Thomas, her husband of 56 years. Janet will be remembered not only as a loving wife, mother and grandmother, but as a gentle soul with a passion for American history, a fan of the theatre, an accomplished baker, a talented knitter and crafter, and a formidable bridge opponent. Janet is survived by her daughters, Christine (Robert Singler) Bunting of Napa, CA, Karen Herndon of Mount Pleasant, SC, Kimberly (Ethan) Snyder of Olive Branch, MS; sister, Paulette Setler of Burlingame, CA; brothers, Charles Setler (Maggie) of Sewickley, PA, Allen Setler (Nancy) of Boise, ID, Thomas Setler of Stroudsburg, PA; granddaughters, Alexandra and Elizabeth Snyder of Olive Branch, MS; eight nieces and one nephew. She was preceded in death by her husband, Thomas George Bunting; parents, Mary Margaret Hynes Setler and Carl G. Setler; sister-in-law, Cindy Lee Setler; and son-in-law, William Charles Herndon. A service will be held at a later date. In lieu of flowers, memorials can be made in honor of Janet Mary Bunting to the National Parks Conservation Association (www.npca.org). Online condolences may be left on her Tribute Wall at www.colemanfuneralhome.com.

The family of Janet Bunting created this Life Tributes page to make it easy to share your memories.

Send flowers to the Bunting family.