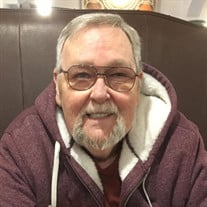 Coleman Funeral Home of Southaven Mr. Jerry T. Watkins, Sr., 76, passed away February 1, 2022, at his home in Southaven, MS. A visitation will be held Thursday, February 10, 2022, from 4:00 p.m. to 6:00 p.m. at Coleman Funeral Home of Southaven (626 Star Landing Road East, Southaven, MS, 38672). A memorial service will immediately follow at 6:00 p.m., also at Coleman Funeral Home of Southaven. Coleman Funeral Home of Southaven is in charge of arrangements. Jerry was born June 18, 1945, in Hornbeak, TN. He was an avid fisherman and reader. He was also a skilled handyman and could fix anything. Jerry’s grandchildren were his pride and joy, and he loved being an amazing grandfather. He was a family oriented man and had a special place in his heart for his cats as well. Jerry is remembered as having a heart of gold and always put others first. Jerry was a faithful and loving husband of 44 years to his wife, Lois. Jerry is survived by his loving wife, Lois Watkins of Southaven; his sons, Bobby (Shelvia) Carmack of Memphis, TN, Jerry Watkins, II of Texas, and Mike (Lisa) Watkins of Missouri; his grandchildren, Tabitha (Matt) Tomlinson of Olive Branch, MS, and Kippie Day of Memphis; his great-grandchildren, Chase Warren, Brayden Warren, and Brooke Warren, all of Olive Branch; his brother, Bobby (Sue) Watkins of Bridge City, TX; his sisters, Barbara (Larry) Hixson of Greenville, MO, and Nelda (Larry) Cook of Jackson, MO; his sisters-in-laws, Barbara Reis of Cape Girardeau, MO, and Dorothy Odenthal of Las Vegas, NV; his brother-in-law, Paul (Julie) Odenthal of Bonne Terre, MO; and a host of nieces and nephews. Jerry was preceded in death by his father, John Thomas Watkins; his mother, Dorothy Nell; and his brother, David Watkins. Donations and memorials in honor of Mr. Jerry T. Watkins may be made to the American Diabetes Association: https://diabetes.org/donate Online condolences may be left on his Tribute Wall at www.colemanfuneralhome.com

The family of Jerry T. Watkins Sr. created this Life Tributes page to make it easy to share your memories.

Send flowers to the Watkins family.