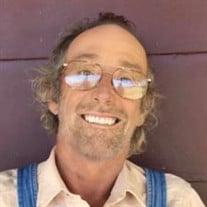 Coleman Funeral Home of Oxford John L. Operle, 60, passed away at his home in Abbeville, MS, on February 19, 2021. A visitation will be held Saturday, March 6, 2021 from 2:00 p.m. to 3:00 p.m. with a memorial service to follow at 3:00 p.m. all at Coleman Funeral Home of Oxford. Coleman Funeral Home of Oxford is in charge of arrangements. John was born to John L. Operle, Sr., and the late Jackie Baker. John was a very hardworking individual who always provided for his family. He was a loving and caring father whose love never ceased. He was an excellent fisherman, mechanic, concrete expert who passed down his techniques to his son, Michael. His daughter, Ashley remembers her dad teaching her how to drive on backroads, a memory that will hold tight forever in her heart. John, the oldest, remembers camping in the back yard during the summer and going to Wall Doxey State Park. Mr. John taught his boys how to be men and how to do “guy stuff”. John was an avid reader and would watch anything that John Wayne starred in. He leaves a legacy of reminding his children to let no one tell you that you can’t do something. If you put your mind and willpower to it, you’ll be able to accomplish anything. The word “can’t” wasn’t in Mr. John’s vocabulary. He will be truly missed by his family and friends. John is survived by his three children, Ashley (Colin) Hall, of Abbeville, MS, Michael Operle, of Abbeville, MS, and John (Casey) Operle, of Brandon, MS; his four grandchildren, Chole Hall, Shane Hall, Natalie Hall, and Michael “Little Mike” Operle Jr.; his siblings, Cindy (Jim) Lacy, of Rossville, TN, Dena (Thomas) Hamilton, of Kerrville, TN, Eric Operle, of Schitz Creek, GA, Valarie (Chuck) Jennings, Glenda (Jay) Godwin, of Festus, MO, Rhonda Seiter Speer, of Parkhill, MO, Larry Seiter, of Nashville, TN; and his father, John L. Operle Sr., Raymondville, TX. John was preceded in death by his wife of 38 years, Sandra Operle; his mother, Jackie Baker; and one brother, Melvin Seiter. Please leave online condolences on the Tribute Wall at www.colemanfuneralhome.com.

The family of John L. Operle created this Life Tributes page to make it easy to share your memories.

Send flowers to the Operle family.