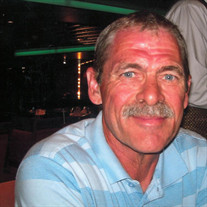 Coleman Funeral Home of Olive Branch Jonathan Ray Thorne, 59, of Southaven, MS, passed away Friday, April 16, 2021. A visitation for family and friends will be held on Saturday, April 24, 2021 at Coleman Funeral Home (6815 Parkview Blvd, Olive Branch, MS) from 10:00 a.m. to 12:00 p.m. with a service to follow at 12:00 p.m. in the chapel. Jon Thorne was born on October 17, 1961 in Wichita, KS. He was employed at Morgan Steel and was a dedicated and hard worker. Jon enjoyed camping and fishing and was helpful to his neighbors and friends. He was very kind and would give anyone the shirt off his back. Jon loved his family and loved spending time with his grandchildren. Jon is survived by his wife, Darlene Thorne of Southaven, MS; daughter, Nicole Marie (Jason) Heg of Tupelo, MS; sons, Cory Joe Campbell of Southaven and Timothy Thorne of Branson, MO; father, Dwight Edward Thorne of Covington, GA; brothers, Jeffery (Lori Ann) Thorne of Lansing, KS, James (Michelle) Thorne of Covington, Tony Thorne of Lilburn, GA and Jay Thorne of Covington; granddaughters, Heidi May Dyer and Ashtyn Lee Campbell of Hernando, MS; grandson, Cody Hunter Campbell of Cordova, TN and a host of nieces and nephews. Jon was preceded in death by his mother, Maxine Lorene Thorne. In lieu of flowers, memorials can be made in honor of Jonathan Ray Thorne to the Tunica Humane Society (www.tunicahumanesociety.com). Online condolences may be left on his Tribute Wall at www.colemanfuneralhome.com.

The family of Jonathan Ray Thorne created this Life Tributes page to make it easy to share your memories.

Send flowers to the Thorne family.