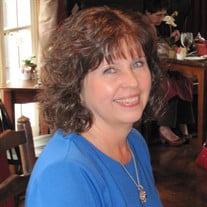 Coleman Funeral Home of Southaven Mrs. Joni McRae Chalmers, 65, passed away Thursday, October 21, 2021, at Baptist Memorial Hospital – Desoto in Southaven, MS. Visitation will be Monday, October 25, 2021, from 5:00 p.m. to 7:00 p.m. at Cornerstone Church (5998 Elmore Rd., Southaven, MS 38671). A funeral service will be held Tuesday, October 26, 2021, at 10:00 a.m., also at Cornerstone Church. Interment will be at Desoto Memorial Gardens (630 Star Landing Rd. East, Southaven, MS 38672). Pastor Greg Davis will officiate. Coleman Funeral Home of Southaven is in charge of arrangements. Mrs. Chalmers was born October 10, 1956, in Memphis, TN, to Jamie and Nancy McRae, who had previously taken in Nancy’s brothers and sisters; seven children in total at that time. She was raised around her aunts and uncles and later, her brothers and sister, as one wonderfully large family unit. She attended Levi and Westwood Elementary Schools, Westwood High School, and later Southaven High School. She was crowned Most Beautiful at Southaven High School, Miss DeSoto County, and Miss Northwest Mississippi Community College. She was a cheerleader at Southaven High School and Northwest Mississippi Community College. She competed in the Miss. Mississippi pageant and won the swimsuit competition. In 1983, she married John H. Chalmers, and they had two children. They have resided in Southaven, since that time. She served as a Sunday school teacher in church, a children’s leader, a band booster, a football and baseball booster, and as a PTA president. She retired from DeSoto County Schools in 2018. She was a woman of strong faith in God and a strong and loved family leader. Her one prayer was to see everyone come to know God as she knew Him. Mrs. Chalmers is survived by her loving husband, John Chalmers of Southaven; her daughter, Mallory (Michael) Putnam of Hernando, MS; her son, Kellen (Stephanie) Chalmers of Brandon, MS; her three granddaughters, Nancy Elise Putnam of Hernando, and Audrey Rae Chalmers and Tatum Kate Chalmers, both of Brandon; one sister, Annette (Mike) Mullins of Southaven; two brothers, Jamie (Donna) McRae, Jr. of Olive Branch, MS, and Cary (Stacey) McRae of Horn Lake, MS; her aunt, Peggy “Pebber” Yielding; her five uncles, Kenny Eldred, Benny Eldred, Sam Eldred, Frank Eldred, and Mac Eldred; and a host of aunts, uncles, nieces, nephews, and extended family members on both the Eldred’s side and the McRae’s side. Mrs. Chalmers was preceded in death by her parents, Jamie McRae, Sr., and Nancy McRae; and her uncle, Tommy Eldred. Donations and memorials in honor of Mrs. Joni McRae Chalmers may be made to St. Jude Children’s Research Hospital (www.stjude.org/donate). Online condolences may be left on her Tribute Wall at www.colemanfuneralhome.com.

The family of Joni McRae Chalmers created this Life Tributes page to make it easy to share your memories.

Send flowers to the Chalmers family.