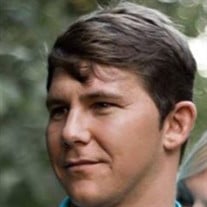 Coleman Funeral Home of Southaven Kaleb Hunter Wilson was born March 29, 1989 in El Dorado Arkansas and entered God’s Kingdom on February 5, 2021. Kaleb graduated from Southaven High School in 2008, where he resided in the community many years to follow. Anyone who knew Kaleb, knew he loved the Lord with all of his heart. Kaleb was a hard worker, who had strong work ethics. He was generous, with a loving soul that would help anyone. He had a sense of humor that would keep you laughing for days. You would never see Kaleb without that beautiful, handsome, dimpled smile of his and, of course, his clothes pressed perfectly for each adventure that awaited him that day. He also loved Vietnamese and Pho food dates with family and friends. When not at work, he could be found spending time on the beach or with his beloved fur baby, Cooper, whom Kaleb loved since he was seven weeks old. He always kept current on politics and fiercely supported our 45th president Donald J. Trump. Kaleb was an avid fan of Ole Miss “Hotty Toddy!” He loved spending his most precious time with his family and friends. He was a loving son, grandson, loyal brother, uncle and nephew. Kaleb is proceeded in death by his Uncle Sean, whom he took after in so many great ways. Those left to cherish his memory include his beloved mother Nichol Phan of Muskogee, OK; stepfather, Poly Phan of Southaven, MS; two sisters, Madison Wilson of Grand Island, NY and Piper Phan of Southaven; two brothers, Mason Wilson of Muskogee and Asa and wife Amanda Phan of Jackson, MS; his grandmother, Billie “Nana” Reynolds of Fort Gibson, OK; his Uncle Zach and wife Daylene Reynolds of Fort Gibson; his Aunt, Memory and husband Kevin Armstrong of Fort Gibson; a niece on the way, many cousins, family, friends and, of course, his buddy Cooper. The family has entrusted in Coleman Funeral Home of Southaven for arrangements. Online condolences may be left on his Tribute Wall at www.colemanfuneralhome.com.

The family of Kaleb Wilson created this Life Tributes page to make it easy to share your memories.

Send flowers to the Wilson family.