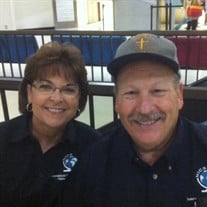 Coleman Funeral Home of Southaven Mr. Kelly M. Weaver, 67, passed away Saturday, July 24, 2021, surrounded by his loving family. A visitation will be held Tuesday, July 27, 2021, from 12:00 p.m. to 2:00 p.m. at Coleman Funeral Home of Southaven (626 Star Landing Rd. East, Southaven, MS 38672). A celebration of life will immediately follow at 2:00 p.m., also at Coleman Funeral Home of Southaven. Rev. Bill Vail will officiate. Coleman Funeral Home of Southaven is in charge of arrangements. Kelly’s journey on this earth started on May 10, 1954. He was born in Memphis, TN to Tommy and Helen Weaver. Kelly was the second oldest of four boys (Keith, Kenny, and Kevin), which made for a wild and entertaining upbringing. Growing up, Kelly loved sports, hunting, and working in his family’s business. On March 2nd, 1978, Kelly’s journey was transformed when he met Jesus as his personal Lord and Savior. This changed the trajectory of his life, his purpose on earth, and his eternal residency. Kelly married his wife of 42 years, Cathy Williams Weaver, in June of 1979. They got busy quickly and had their first child, Blair Weaver Anderson, in 1980. Their son, Blake Weaver was born in 1983, and their youngest son, Brett Weaver, was born in 1986. Kelly and Cathy served the Lord in pastoral ministry for 42 years. Their ministry efforts were rooted in Jackson, TN, Denton, TX, Tumbling Shoals, AR, Southaven, MS, Uijongbu, South Korea, Fairbanks, AK, and finally, Southaven, MS. Kelly never met a stranger, and he was passionate about introducing others to Jesus. He was infamous for shouting “Glory!” whenever he was moved by the Spirit. While that often startled others around him, it was evidence of his zeal for the Lord. Kelly leaves behind his wife, three children, and seven grandchildren. While they will dearly miss him, they are all so proud of the way he ran his race. Kelly is a faithful warrior who is now in heaven. He is convinced it was worth it. Donations and memorials in honor of Mr. Kelly M. Weaver may be made to Greenbrook Baptist Church (8137 Greenbrook Pkwy., Southaven, MS 38671). Online condolences may be left on his Tribute Wall at www.colemanfuneralhome.com.

The family of Kelly M. Weaver created this Life Tributes page to make it easy to share your memories.

Send flowers to the Weaver family.