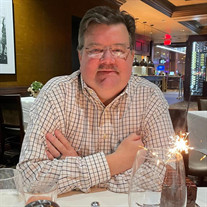 Coleman Funeral Home of Southaven Mr. Kevin T. McNeese, 58, passed away January 23, 2022 at Baptist Memorial Hospital – DeSoto in Southaven, Mississippi. A visitation will be held Monday, January 31 from 1:30 p.m. until 3:30 p.m. at Getwell Church (7875 Getwell Road, Southaven, MS 38672). A funeral service will follow on Monday, January 31, at 3:30 p.m., also at Getwell Church. Coleman Funeral Home of Southaven is in charge of arrangements. Mr. Keven T. McNeese was born on December 24, 1963. He was an active member of Getwell Church alongside his wife of almost 30 years, Christy McNeese. Kevin was an avid Memphis Tigers fan and graduated from the University of Memphis with his Bachelors in Accounting. He served for over 25 years in his career and loved his most recent role as Senior Director of Finance/Controller. Kevin was an avid outdoorsman. In his spare time, he enjoyed hunting, golfing, and cooking on his three grills. He also loved knives and was proud of his cooking knife collection. Kevin was a skilled woodworker, having made many of the furniture in his home. He was a very supportive individual and always took the opportunity to support and help others in any way he could. Even in death, Kevin displayed his extreme generosity, as he made the decision to be a donor. He helped saved the lives of up to 100 people through eye and tissue donation. Mr. Kevin T. McNeese is survived by his wife, Christy McNeese of Southaven, MS; His daughter Carlye McNeese of Southaven, MS; Brother, Craig McNeese of Memphis, TN; and nephew, Ben (Savannah) McNeese of Arlington, TN. Mr. McNeese was preceded in death by his father, Mr. Carl McNeese and mother, Mrs. Nancy McNeese. Donations and memorials in honor of Mr. Kevin T. McNeese may be made to St. Jude Children's Research Hospital (www.stjude.org/donate). Online condolences may be left on his Tribute Wall at www.colemanfuneralhome.com

The family of Mr. Kevin T. McNeese created this Life Tributes page to make it easy to share your memories.

Send flowers to the McNeese family.