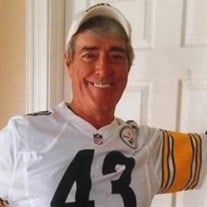 Coleman Funeral Home of Olive Branch Robert Lane Martin, 70, of Olive Branch, MS, passed away Thursday, July 8, 2021. There will be a Celebration of Life service in Lafayette, Indiana at a later date. Lane Martin was born on July 26, 1950 in Lafayette, IN. He will be best known for his love of life and people. Lane loved to cook and was always known for his hot chili that he would take in to the Caterpillar carry-ins. In 1982, Lane was among the first hired hourly employees for Assembly of the 3500 Engine at the Lafayette Caterpillar Large Engine Center, (LEC). In 2009, at the time of his retirement from Caterpillar, he was a Supplier Development Engineer. Lane was a forty-eight year member of the Masonic Lodge, being initiated in Delphi, IN in 1973. He became a 32nd Degree Master Mason, joining the Scottish Rite in Indianapolis in 1983. Lane loved cars, specifically his corvettes, both 1984 and 2007 Vette. His favorite team was the Pittsburgh Steelers, always dressed in Steeler attire from head to toe and an avid fan. He even named his dog Steeler. Once he retired, he was able to enjoy his other loves of woodworking and golfing. Lane is survived by his loving wife, Deb McCloud Martin of Olive Branch; sons, Nathan (Katie) Martin of Las Vegas, NV, Cameron (Lexie) Wilson of Lafayette, IN and Bryce Wilson of Fishers, IN; granddaughters, Tiara Martin and Kaelee Wacaster; grandsons, Noah and Isaiah Martin and Conner Wacaster and brother-in-life, Steve Gellenbeck. Lane was preceded in death by his parents, Virginia Fleming Martin and Robert Claude Martin; daughter, Angela Martin Zink and brother, Gregory Martin. In lieu of traditional flowers, memorials can be made in honor of Robert Lane Martin to St. Jude Children’s Hospital (www.stjude.org) and the Shriners Hospital for Children (www.shrinershospitalsforchildren.org).

Coleman Funeral Home of Olive Branch Robert Lane Martin, 70, of Olive Branch, MS, passed away Thursday, July 8, 2021. There will be a Celebration of Life service in Lafayette, Indiana at a later date. Lane Martin was born on July 26, 1950... View Obituary & Service Information

The family of Lane Martin created this Life Tributes page to make it easy to share your memories.

Send flowers to the Martin family.