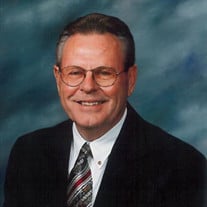 Coleman Funeral Home of Oxford Lawrence Chandler, 84, passed away Tuesday, May 24, 2022, in Oxford, MS. A visitation will be held Thursday, May 26, 2022, from 5:00 p.m. to 7:30 p.m. at Coleman Funeral Home of Oxford. A funeral service will be held Friday, May 27, 2022, at 1:00 p.m. at Oxford Church of Christ. A graveside service will be held at Shiloh Cemetery. Coleman Funeral Home of Oxford is in charge of arrangements. Lawrence Chandler, son of Harold and Clida Mae Chandler, was born October 27, 1937, in Oxford, MS. and was raised in the Yocona, MS area. After high school, he received a basketball scholarship to attend Northwest Community College, followed by two years in the army where he received the rank of Sergeant E5. His army accolades included First Place in M1 Rifle Shooting and First Place in Automotive Repair and Technology. Upon leaving the Army, he graduated from the University of Mississippi with a degree in Business and Marketing. He married Dudley Jean Chandler on September 29, 1962, and they would have been married 60 years this September. He first worked for Kraft Foods as a Field Representative out of Grenada, MS, then Branch Manager at Trailmobile Trucking Company in Memphis, TN. and Dallas, TX. Later, he became Sr. Vice President of Sales for Trailmobile in Chicago, IL. He was also COO of Penske Tank Company and served as Roger Penske’s right hand man in Minneapolis, MN. Mr. Penske is an American businessman and transportation entrepreneur. Lawrence missed ‘home’ and with his words, he stated, “Our family had strong family values and we wanted to ‘return to our roots’.” Opening of the Chrysler, Dodge and Plymouth dealership in 1983 was the business opportunity that the Chandlers needed. Jeep was added in 1990 and the Nissan dealership in 1993. After college, Larry joined his father in the business and has contributed greatly in making the business a success. Lawrence’s wife, Jean, worked in the clerical office and was the “voice of Chandler” as a receptionist. He enjoyed working with his son-in-law Mason and daughter Leslie as well. He enjoyed 32 years as owner and president of both. He attributed much of his early success at Chandler Motor to some very great employees, among them, Bill West, Phyllis Vaxter, Gene Redmond, and of course his family. As a successful businessman who loved Oxford, he served for 4 years as President of Oxford Lafayette Economic Development Foundation and was instrumental in attracting several industries to Oxford. He was also one of the initial members of Oxford Trust Fund. He loved Oxford and Lafayette County and gave to his community is a very selfless way. After retirement, Lawrence and Jean enjoyed much happiness on the farm with their small herd of angus cattle, and lasting friendships with their neighbors, the Lovelace and Coleman families. He faithfully served his Lord and Creator as an elder at Crystal Lake Church of Christ, outside Chicago, IL, and Oxford Church of Christ for over 20 years. He lived his faith daily and was an inspiration and mentor for so many in their spiritual journey and their business journey too. Mr. Chandler was preceded in death by his parents, Harold and Clida Mae Chandler and his brother, Billy Carter Smith. He is survived by his wife, Jean Welch Chandler; his sons, William Lawrence Chandler (Suzanne) and Charles Lee Chandler (Lee); his daughter, Leslie Jean Chandler Rives (Mason); 8 grandchildren; 4 great grandchildren; and his beloved dog, Biscuit. The family would like to thank the Jan Lavender Lewis family for their most painful and generous gift. The liver of our husband, father, and grandfather received is from their son and brother, Bryan. We were given 17 additional years because of their loss, and for this, we are eternally grateful. In lieu of flowers, donations may be made to St. Jude (https://www.stjude.org/donate/donate-to-st-jude.html) or University Methodist Hospital/Transplant Clinic (https://app.mobilecause.com/form/xk_qvg?vid=s77zd).

The family of Lawrence Earl Chandler created this Life Tributes page to make it easy to share your memories.

Send flowers to the Chandler family.