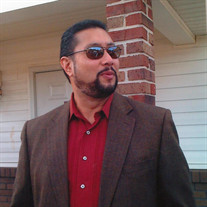 Lewis A. Roberts, III, 58, passed away April, 23, 2022, in Southaven, MS. A visitation will be held on Friday, April 29, 2022, from 12:00 p.m. to 2:00 p.m. at Coleman Funeral Home of Southaven (626 Star Landing Road, East, Southaven, MS, 38672). A funeral service will immediately follow at 2:00 p.m., also at Coleman Funeral Home of Southaven. Coleman Funeral Home of Southaven is in charge of the arrangements. Lewis was born on February 14, 1964, in Memphis, TN. He was a devoted husband, father, and grandfather. On warm summer days, you would catch him at the golf course enjoying a game of golf, or in the great outdoors camping and enjoying the scenery. In his free time, he would sit for hours and play the guitar. If you were lucky, you would catch him singing karaoke. Mr. Lewis will definitely be missed by his family and friends. Mr. Lewis is survived by his wife of 38 years, Alisha Roberts of Southaven; his parents, Lewis A. Roberts, Jr. and Benita Roberts of Ashland, MS; his two daughters, Mallori (Andrew) Mitchell of Southaven, and Lindsay Gandy of Southaven; two grandchildren, Myla Mitchell and Josh Gandy, both of Southaven; his brother, Laray (Tina) Roberts of Olive Branch; a host of nieces and nephews; as well as extended family members and friends. Online condolences may be left on his Tribute Wall at www.colemanfuneralhome.com .

The family of Lewis A. Roberts III created this Life Tributes page to make it easy to share your memories.

Send flowers to the Roberts family.