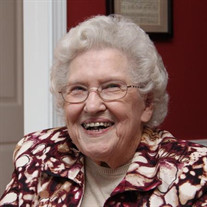 Coleman Funeral Home of Oxford Marjorie Glenn Brown Parks, 92, passed away Wednesday, July 21, 2021, in Grayson, GA, surrounded by her family. A visitation will be held Sunday, July 25, 2021, from 1:00 p.m. to 3:00 p.m. at Coleman Funeral Home. A service will be held immediately after at 3:00 p.m., also at Coleman Funeral Home. Interment will be at Shiloh Cemetery. Bro. David Ard will officiate. Coleman Funeral Home of Oxford is in charge of arrangements. Marjorie Glenn Brown Parks, born five minutes before her beloved twin brother Maurice Venn “Dock” Brown on July 24, 1928, was the second born child of Lewis Sidney and Maggie McLarty Brown. Less than a decade later, the entire community came out to the Brown homestead to gather and pray for Marjorie as she fought through a devastating bout with polio. The doctors didn’t expect her to live that day and if she did, they said she would never walk again. Yet here we gather again together more than eight decades later to celebrate a life filled with blessings. Marjorie celebrated 54 years of marriage to McCamie Quay “Jack” Parks, a retired highway patrolman based in Oxford, MS, who preceded her in death in 2002. They raised two beautiful daughters, Lynn (Neal) Young and Linda Gale (Daniel) Huston, and mourned the short life of their child Barbara Helen. She also was devoted to her niece Brenda (Billy) Berry, daughter of Dock and his wife Lucy, and nephews Jackie (Lynn) and Rodger (Diane) Brown, sons of her brother James and his wife Wilma, as well as her Nelson - Parks niece and nephews and many other extended cousins and family members. Marjorie has been affectionately known as Memaw to 7 grandchildren and 16 greatgrandchildren. A lifelong member of Lebanon Presbyterian Church in Toccopola, MS and more recently a member of the United Methodist Women of Grayson (GA) United Methodist Church, Marjorie was devoted to her family, her church, and her friends. She offered a joyful smile, an encouraging word, and a thoughtful prayer to everyone she met. Marjorie is survived by her 2 daughters, Lynn (Neal) Young, of Grayson, GA, and Linda Gale (Daniel) Huston, of Sioux Falls, SD; her 7 grandchildren, Jason (Reyna) Young, of Marietta, GA, Camie (Michael) Williams, of Statham, GA, Ethan (Jenifer) Young, of Braselton, GA, Jason (Marla) Huston, of Sioux Falls, SD, Jeremy (April) Huston, of Nashville, TN, Jerrod Huston, of Rumford, ME, and Joshua Huston, of Sioux Falls, SD; 16 great-grandchildren, Isabella Lynn Young, Angel Gomez, Gigi Gomez, and Mark Gaitan, all of Marietta, GA, Gabriel Williams and Hannah Williams, both of Statham, GA, Paige Gergely and Ryan Young, both of Braselton, GA, Joylee Nelson and Koda Huston, both of Sioux Falls, SD, Grant Huston, of Nashville, TN, Vincent Schwartz, Jack Huston, Brent Huston, and Rory Huston-Schwartz, all of Sioux Falls, SD, and Joshua David Smith, of Bolton County, GA; her niece, Brenda (Billy) Berry; her 2 nephews, Rodger (Diane) Brown and Jackie (Lynn) Brown. Marjorie was preceded in death by her husband, McCamie Quay “Jack” Parks; her daughter, Barbara Helen Parks; her parents, Lewis and Maggie Brown; and her 2 brothers, Maurice “Dock” (Lucy) Brown and James (Wilma) Brown. In lieu of flowers, donations and memorials can be made to St. Jude Children’s Research Hospital (https://www.stjude.org/donate/donate-to-st-jude.html). Online condolences may be left on the Tribute Wall at www.colemanfuneralhome.com. If you are unable to attend the funeral service in person, you may also view the service online at the same site. A link will appear on the Tribute Page on the day of the service for access.

The family of Marjorie Glenn Brown Parks created this Life Tributes page to make it easy to share your memories.

Send flowers to the Parks family.