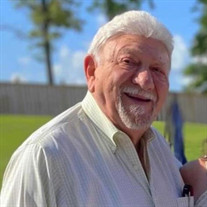 Coleman Funeral Home of Olive Branch Monroe Allen Weaver, 85, of Memphis, TN passed away on Thursday, January 27, 2022. The family will receive friends on Wednesday, February 2, 2022 from 4:00 pm until 6:00 pm with the service to follow at 6:00 pm all at Coleman Funeral Home of Olive Branch. Interment will be held at a later date at West Tennessee State Veterans Cemetery. Brother Jack Moore of Emmanuel Baptist Church in Collierville, TN will officiate. Monroe was born on December 1, 1936 in Hardeman County, TN. He served honorably in the United States Army and later retired from the Army Reserve. He was a member of Emmanuel Baptist Church in Collierville, TN. He was very interested in cars and enjoyed restoring old vintage cars. He spent a lot of time with his car club and loved going to Riverside Speedway in West Memphis, AR. He loved to sit around and tell stories of old times with his family to all of his grandchildren, nieces, and nephews. Monroe is survived by his daughter, Debbie Hajek (Dan) of Southaven, MS; sons, Wayne Weaver (Helene) of Morrow, OH, Joe Weaver of Memphis, and Robbie Weaver, Sr. (Kim) of Collierville, TN; step-son, Jay Waters (Jen) of Lebanon, OH; granddaughter, Lindsay Britt (Hayes) of Memphis; grandson, Robbie Weaver, Jr. (Lindsey) of Cordova, TN; five great-grandchildren; sisters, Ruth Wiggins of Southaven, and Dianne Mansel of Walls, MS; and a host of nieces and nephews. Monroe was preceded in death by his mother, Ivedell Oakes; father, Clinton Curtis Weaver; and brothers, Clinton Ray Weaver, and George Edward Weaver. In lieu of traditional flowers, memorials can be made in his name to St. Jude Children’s Research Hospital (www.stjude.org) or Shriners Hospital for Children (www.shrinerschildrens.org). In honor of Monroe Weaver’s service to our country, the flag of the United States Army will be flown at Coleman Funeral Home the day of the service. Online condolences may be left on his Tribute Wall at www.colemanfuneralhome.com.

Coleman Funeral Home of Olive Branch Monroe Allen Weaver, 85, of Memphis, TN passed away on Thursday, January 27, 2022. The family will receive friends on Wednesday, February 2, 2022 from 4:00 pm until 6:00 pm with the service to follow at... View Obituary & Service Information

The family of Monroe Allen Weaver created this Life Tributes page to make it easy to share your memories.

Send flowers to the Weaver family.