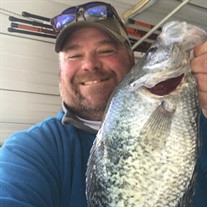 Coleman Funeral Home of Southaven Norris "Bubs" Earl Plunkett Jr. passed away March 20, 2022 in Como, MS. Memorial and visitation will be held Friday, April 1, 2022 from 5 PM - 7 PM at Coleman Funeral Home of Southaven (626 Starlanding Road East, Southaven, MS 38672). Coleman Funeral Home of Southaven is in charge of arrangements. Norris was born March 24, 1971, and spent most of his life in DeSoto County. He was a very simple southern man. He made a friend wherever he went. He was a devoted husband and beloved Dad. He was an avid outdoorsman and enjoyed fishing, working on his boat, and always keeping himself busy. He was an Ole Miss fan. Norris was an extremely hard worker, selfless, and always put others before himself. He loved nothing more than spending time with family and friends grilling out and just being together. He also spent many years as a volunteer coach for various youth sports leagues in Olive Branch and was the owner of Alan's Carpet and Flooring in Collierville, TN. Norris is survived by his wife Candace “Candy” Plunkett of Slayden, MS; his son, Parker Plunkett of Slayden; his mother, Judith “Judy” Plunkett of Southaven; his brother, Greg Plunkett of Southaven; his sister, Tami Luker of Southaven; his sister-in-law Jamie Casey of Ohio; his brother-in-law, Shane (Haley) Hall of Covington, TN; his mother-in-laws, Patricia (Jim) Casey of Collierville, TN, and Judy Farmer of Hernando, MS; his grandmother-in-law, Patsy Elkins of Hernando; his nephews, Mark Landon Millwood of Utah, Paxton Messer and Houston Hall, both of Covington; and his niece, Taylor Hall of Bartlett, TN. Mr. Plunkett was preceded in death by his father, Norris Earl Plunkett, Sr.; his father-in-law, Jimmie Farmer; and his brother-in-law Jimmy Luker. Donations and memorials in honor of Mr. Norris Plunkett, Jr. may be made to St. Jude Children’s Research Hospital (www.stjude.org/donate). Online condolences may be left on his Tribute Wall at www.colemanfuneralhome.com.

The family of Mr. Norris "Bubs" Earl Plunkett Jr. created this Life Tributes page to make it easy to share your memories.

Send flowers to the Plunkett family.