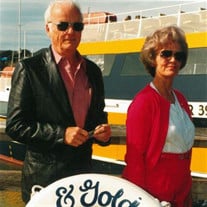 Coleman Funeral Home of Oxford Mr. Ralph Merrick Dean, Jr., 95, died April 17, 2019, at his home in Oxford, MS. A private family service will be held Friday, April 19, 2019, at Oak Hill Cemetery. Interment will also be at Oak Hill Cemetery (Blackmur Dr., Water Valley, MS 38965). Chaplain David Westmoreland will officiate. Coleman Funeral Home of Oxford is in charge of arrangements. Mr. Dean was born May 11, 1923, in Vermontville, MI, to the late Reverend Ralph Merrick Dean, Sr., and Hazel Ayers Dean. He was a member of the Oxford University United Methodist Church for many years. With his passion for flying, Mr. Dean enlisted in the Army Air Corps in 1942. He earned his wings, and he was assigned to the 384th Bomb Group (H), 8th Air Force in England. There he would serve two tours with the 384th and 91st Bomb Group (H), respectively. The Distinguished Flying Cross was awarded to Lt. Dean for extraordinary service. He was called back to duty in 1952 with the United States Air Force until retiring in 1967 at the rank of Lt. Colonel. He then worked for the Department of Agriculture until retiring in 1987. Mr. Dean is survived by his wife, LaVerne Valencia Dean of Oxford; and her son, Bill B. Valencia, of Oxford. In addition to being survived by his wife and son, Mr. Dean is survived by two sons, Daniel Merrick (Margaret) Dean of Germantown, TN, and Ralph Maury (Tis) Dean of Oxford; four grandchildren, Dr. Marc (Tanya) Dean of Rome, GA, Heather Rebecca Dean of Galveston, TX, Virginia (Michael) Dean Scheck Loveland, OH, and Mamie (Joseph) Dean Brett of Nashville, TN; and 9 great-grandchildren. Mr. Dean is also survived by one sister, Edith Dean Weber of Grand Rapids, MI; one sister-in-law, Teresa Olson of TX; and one nephew-in-law, Dewayne Gilliland of Millington, TN. Mr. Dean was preceded in death by his parents, Ralph M. Dean, Sr., and Hazel Dean; one sister, Olga Dean; one brother, Charles Dean; and the mother of his children, Sarah Rebecca Delp Dean. In honor of Mr. Dean’s service to our country, the flag of the United States Air Force will be flown at Coleman Funeral Home. Donation and memorials in honor of Mr. Ralph Merrick Dean, Jr. can be made to the National Museum of the Mighty Eighth Air Force (P.O. Box 1992, Savannah, GA 31402). Online condolences may be left on his Tribute Wall at www.colemanfuneralhome.com.

The family of Mr. Ralph Merrick Dean Jr. created this Life Tributes page to make it easy to share your memories.

Send flowers to the Dean family.