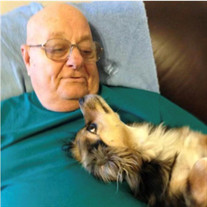 Coleman Funeral Home of Southaven Mr. Rex Bush, 79, passed away Sunday, May 16, 2021 at his home. Coleman Funeral Home of Southaven, 626 Star Landing Road, East, Southaven, MS 38672, is in charge of arrangements. Mr. Bush was a proud veteran of the U.S. Armed Forces. He loyally and patriotically served his country in the Navy, as a Chief Petty Officer, for twenty years, two months, and twelve days. Rex was a reserved, yet funny and giving man. He knew the value of friendship and had a tight circle of close friends and family. Included in his circle, was his trustworthy canine companion, Mona “Mo” Lisa. On sunny days, Mr. Bush could be found fishing, as he was an avid fisherman, and enjoying the outdoors. Mr. Rex Bush is survived by his two loving daughters, Janice (Joe) Bush Davis of Horn Lake, MS and Juanita (Bob) Bush Hoverson of Jordan, MT; his six grandchildren, Zachary (Nicole) Sims of Miles City, MT; Roy Sims of Marion, AR; Nicolas Myers of Horn Lake, Graycie Pegram of Horn Lake; Brianna Davis of Horn Lake; Journey Davis of Horn Lake; two great grandchildren, Jace Sims and Kain Sims, both of Miles City, MT; his sister, Nona (Clayton) Ryals of Locksburg, AR; and Susan Mae Wise of Apache Junction, AZ., who is the mother of his daughters with whom he maintained a loving life-long friendship. Mr. Bush was preceded in death by his parents, David and Hattie Ann Bush. Rex will truly be missed by those who loved him and knew him. Online condolences may also be left on his Tribute Wall at www.colemanfuneralhome.com.

The family of Rex Bush created this Life Tributes page to make it easy to share your memories.

Send flowers to the Bush family.