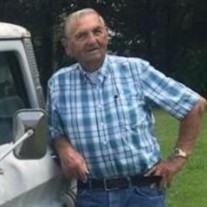 Coleman Funeral Home of Olive Branch Richard Rogers, 82, of Byhalia, MS, passed away on Thursday, February 3, 2022. A memorial service will be held at a later date. Coleman Funeral Home of Olive Branch, MS is in charge of the arrangements. Richard was born on July 11, 1939 in Stevensville, TX. He was a member of the NRA. Richard was a union supporter and belonged to the IAM. He honorably served his country in the Air Force. Richard was a huge animal lover. He loved racing of all kinds. Richard was married to the love of his life, Sylvia, for 64 years and was devoted to his family. Richard is survived by his wife, Sylvia Irene Rogers of Byhalia; daughter, Kathy Wade of Byhalia, MS; son, Thomas Jeffrey Rogers (Nita) of Byhalia; eight brothers and sisters; granddaughters, Amy Lena-Michelle Wirtz (Cory) of Stockton, CA, Shelby Danielle Young (Logan) and Emily Rose Wade of Byhalia; grandsons, William Richard Rogers of Lodi, CA, Tommy Richard Rogers and James Richard Wade of Byhalia and several great-grandchildren. Richard was preceded in death by his parents, Alline Ophelia Head and Alton Lee Rogers. In lieu of flowers, memorials can be made in honor of Richard Fred Rogers to the American Heart Association (www.heart.org).

The family of Richard Rogers created this Life Tributes page to make it easy to share your memories.

Send flowers to the Rogers family.