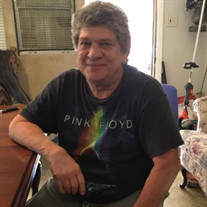 Coleman Funeral Home of Southaven Mr. Rickey Martin Curbo, 61, passed away March 14, 2022, at Baptist Memorial Hospital Desoto in Southaven, MS. A visitation will be held Friday, March 25, 2022, from 1:00 p.m. to 3:00 p.m. at Coleman Funeral Home of Southaven (626 Star Landing Road East, Southaven, MS 38672). A funeral service will immediately follow at 3:00 p.m., also at Coleman Funeral Home of Southaven. Coleman Funeral Home of Southaven is in charge of arrangements. Rickey graduated from Sheffield High School in Memphis, TN and lived and worked in the Memphis area his entire life. He was a hard-working Electrician for over 35 years. He was an exceptional handyman, and loved to fix anything he could get his hands on. Rickey was always laid back, goofy, and kind. He loved music, and was a big fan of The Rolling Stones and Pink Floyd. He was an avid hunter, fisherman, and outdoorsman. He enjoyed watching westerns and The Three Stooges. He would give anything he had to help someone out. Above all else, Rickey enjoyed spending time with his children and grandchildren. Mr. Curbo is survived by his sons, Matthew (Laura) Curbo of Lawton, OK, and Trevor Curbo of Oxford, MS; his daughters, Lori Curbo of San Antonio, TX, and Sara McGee of Memphis, TN; his mother, Linda Curbo of Olive Branch, MS; his grandchildren, Illiana Curbo, Darren Curbo, Cameren Martin, Lily Martin, Harrison Hernandez, Yuna Curbo, and Victoria Curbo; his brothers, Randy Curbo of Olive Branch, Ray (Sonyja) Walters of Olive Branch, Tony (Laura) Curbo of St. Pete Beach, FL, and Russell (Rhonda) Walters of Memphis; and his sister, Melanie Patrick of Olive Branch. Mr. Curbo was preceded in death by his father, Charles Curbo; his biological mother, Mary Walters; and his brothers, Ronnie Curbo and Robbie Walters. Online contributions may be left on his Tribute Wall at www.colemanfuneralhome.com.

The family of Mr. Rickey Martin Curbo created this Life Tributes page to make it easy to share your memories.

Send flowers to the Curbo family.