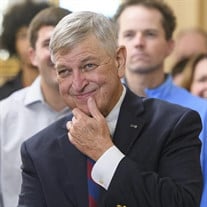 Coleman Funeral Home of Oxford Mr. Robert Dewey Knight, 72, passed away at his home on Wednesday, November 11, 2020. Born in Oxford, MS, everyone who knew Dewey knew that he was a passionate Ole Miss Rebel. As a child in the 1950s, Dewey Knight grew up cheering for the Ole Miss Rebels and enrolled at the University of Mississippi in the Fall of 1966. At the time, he was unaware of what a profound role the University would play in his life. Dewey earned degrees in Advertising and Higher Education Leadership from Ole Miss, but is perhaps best known on campus for his role as Associate Director of the Center for Student Success and First Year Experience, as well as his seventeen year tenure in the Office of Financial Aid. Dewey loved teaching and working with students and was awarded the Thomas F. Frist Student Service Award in 2012 and the Bonita C. Jacobs Transfer Champion award in 2016. Dewey was also a passionate Alpha Tau Omega and he spent over a decade as the Fraternity’s Advisor. Dewey will also be remembered as a passionate member of St. Peter’s Church, where he served as Senior Warden, taught Sunday school, and participated on countless committees. One parishioner described him as the Church’s “most active civilian”. A visitation will be held on Friday, November 13, 2020 from 2:00 PM to 4:00 PM on the Knight’s patio at 315 Garner Street, Oxford, MS. A memorial service will be held on Saturday, November 14, 2020, at 11:00 AM at St. Peter’s Episcopal Church in Oxford, MS. Interment will follow in St. Peter’s Church Columbarium. Reverend Jody Burnett, Reverend Jennifer Southall, Reverend Duncan Gray, and Reverend Penny Sisson will officiate. Dewey was preceded in death by his parents, Joseph Sorelle and Allie Mable Knight. He is survived by his wife, Theresa Holliman Knight; his daughters, Macy Knight Rives, Bethany Reed Hairston, Angela Michele Reed; his son, Robert Miles Knight; his brother Walker Sorelle Knight, and seven grandchildren. Please leave online condolences on the Tribute Wall at www.colemanfuneralhome.com.

Coleman Funeral Home of Oxford Mr. Robert Dewey Knight, 72, passed away at his home on Wednesday, November 11, 2020. Born in Oxford, MS, everyone who knew Dewey knew that he was a passionate Ole Miss Rebel. As a child in the 1950s, Dewey... View Obituary & Service Information

The family of Robert Dewey Knight created this Life Tributes page to make it easy to share your memories.

Send flowers to the Knight family.