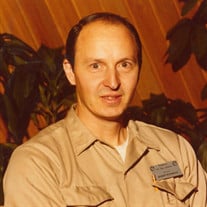 Coleman Funeral Home of Olive Branch Roger Bruce Peterson, Sr., United States Navy Veteran passed away peacefully at his home in Coldwater, MS, on May 26, 2021. The family will welcome friends at a visitation on Friday, June 4, 2021 from 10:30... View Obituary & Service Information

The family of Roger Bruce Peterson, Sr. created this Life Tributes page to make it easy to share your memories.

Send flowers to the Peterson, family.