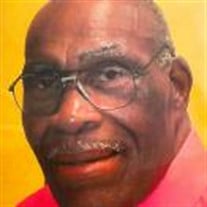 Coleman Funeral Home of Oxford Rufus Miller, 92, passed away Monday, March 7, 2022, in Oxford, Mississippi. A visitation will be held Saturday, March 12, 2022, from 10:00 a.m. to 11:00 a.m., at Christ Temple C.M.E. (501 Jackson Avenue East, Oxford, Mississippi 38655). A funeral service will be held immediately following at 11:00 a.m., also at Christ Temple C.M.E. Interment will be at Haven Rest Cemetery in Grenada, Mississippi (1001-1019 Fox Street Grenada, Mississippi 38901). Rev. Brian Davis will officiate. Coleman Funeral Home of Oxford is in charge of arrangements. Rufus Miller was born September 13, 1929 to the late A.C. Miller and Lela Hill in Glendora, Mississippi. He confessed his love of Christ at an early age and became a member of Mt. Levy Baptist Church in Mississippi. He entered the military in August 1952. After basic training at Fort Lee, Virginia, his first assignment was Korea. Next, he was assigned to Fort Gordon, Georgia. There, he met his wife, Nellie Huff. They were happily married for 59 years before her passing in 2014. His other assignments were: Japan, Thailand, Fort Hood, Texas, Panama, Puerto Rico, Fort McClellan, Alabama, Vietnam, three tours in Germany, Fort Riley, Kansas, and two tours in Korea. He retired from the military in 1973. He relocated back to Georgia, where he became a member of Miles C.M.E. Church in Augusta, Georgia. Mr. and Mrs. Miller adopted two children, Emerald and Michael. In church, he served on the Steward Board and the Trustee Board. He was also a member of the male choir. Additionally, he was the Church Treasurer. He relocated to Oxford, Mississippi, becoming a member of Christ Temple C.M.E. Church. He leaves to cherish his memories, his daughter, Emerald Miller, of Augusta, Georgia; his son, Michael (Iris) Miller, of Ava, Missouri; four granddaughters, Kililak Miller, Lakosha Miller, Jace Miller, and Diamond Miller; three sisters, his twin sister, Ruby Brewer, of Memphis, Tennessee, Lela Conley, of Dixmoor, Illinois, and Caldoney Willis, of Alsip, Illinois; his Goddaughter, India Williams, of Augusta, Georgia; two Godsons, Tony Howard, of Grovetown, Georgia and Jarred Crowder, of Atlanta, Georgia; nephew, Jerry Miller; and a host of nieces, nephews, cousins, and dear friends. Please leave online condolences on his Tribute Wall at www.colemanfuneralhome.com.

The family of Rufus Miller created this Life Tributes page to make it easy to share your memories.

Send flowers to the Miller family.