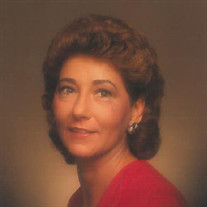 Coleman Funeral Home of Oxford Mrs. Ruth Ann Prather, 74, passed away at Baptist Memorial Hospital in Oxford, MS, on Friday, January 21, 2022. A visitation will be held on Tuesday, January 25, 2022, from 5:00 p.m. to 7:00 p.m., at Coleman Funeral Home of Oxford. A funeral service will be held on Wednesday, January 26, 2022, at 11:00 a.m., at Coleman Funeral Home of Oxford. Interment will immediately follow at Cornersville Cemetery (Hwy 349 South, Potts Camp, MS). Bishop Steve Davis will officiate. Coleman Funeral Home of Oxford is in charge of arrangements. Ruth was born on July 12, 1947, to the late Mr. Shoffer Daniel Karr and Mrs. Maxine Deloris Henderson Karr. As a young child Mrs. Ruth was able to travel and live in multiple areas due to her father being in the military. Her children fondly remember her making sure they saw where she graduated from high school when they went on a trip to Denver. Ruth and her husband enjoyed riding horses together and playing cards. Ruth also enjoyed cross-stitching, collecting porcelain dolls, and reading all things John Grisham. She was an active member of The Church of Jesus Christ of the Latter-day Saints. One of the most enjoyable things that filled her life was teaching the children about her Lord during Sunday School. Ruth will be dearly missed by her family and friends. Ruth is survived by her two children, John “Robby” (Salena) Henderson and Cheryl (Larry) Rhynes, both of Oxford; stepson, Shane (Lyla) Prather, of Honolulu, HI; seven grandchildren and ten great-grandchildren; and one brother, Dennis Karr, of Oxford. Ruth is preceded in death by her husband, Howard Greer Prather; her parents, Shoffer Daniel and Maxine Deloris Henderson Karr; brother, Danny Karr; and two grandsons, Austin Henderson and Nick Rhynes. Please leave online condolences can be left on The Tribute Wall at www.colemanfuneralhome.com.

The family of Ruth Ann Prather created this Life Tributes page to make it easy to share your memories.

Send flowers to the Prather family.