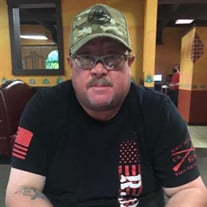 Coleman Funeral Home of Southaven Samuel “Buck” McGan, IV, 42, passed away September 21, 2021, at Baptist Memorial Hosptial – Desoto, in Southaven, MS. Visitation will be Sunday, September 26, 2021, from 1:00 p.m. to 3:00 p.m. at Coleman Funeral Home of Southaven (626 Star Landing Rd. East, Southaven, MS 38672). A funeral service will immediately follow at 3:00 p.m., also at Coleman Funeral Home of Southaven. Interment will be at Forest Hill Memorial Park - South (2545 East Holmes Rd., Memphis, TN 38118). Coleman Funeral Home of Southaven is in charge of arrangements. “Buck” is survived by his wife, Samantha; his sons, Brandon Griffin (Annabelle Clark) and Zachary Griffin of Osceola, AR; his mother, Linda McGan of Horn Lake, MS; his brother, Ricky McGan (Candy) of Ward, AR; his grandmother, Marie “Meema” Claye of Horn Lake; his uncles, Don Claye (Sharon) of Michigan, and Terry McGan (Pam) of Bartlett, TN; and his aunts, Judy Taylor of Searcy, AR, and Patricia McGan of Olive Branch. “Pappy” also leaves behind his grandson, Drake Griffin of Osceola; his niece, Maylee McGan of Ward; and numerous cousins, friends, fellow MS State Guard troops, and Firemen of Nesbit Fire Station, in Nesbit, MS. Buck was preceded in death by his father Samuel McGan, III; his grandfathers, Samuel McGan II, and A. J. Claye; his Uncle Steve McGan; and his aunt, Nancy Jane Robbins. Buck and Samantha met 19 years ago. Their love is still as strong as the day they met. Zachary was just 13 months old and Brandon was 3 years old. He considered the boys as “sons” not “stepsons”. He loved them as his own! Buck’s love for the Military began at an early age, dressing in camouflage and playing army. His dream of being a fireman began with the big fire truck that his Papa Claye gave him, which led to him serving at the Nesbit Fire Department from the age of 19 to present. Buck attended Youth Challenge Academy at Camp Shelby in Hattiesburg, MS, graduating in 1996. He mentored several local youth at the academy who later joined various branches of the Armed Forces. Buck was in Boy Scout Troop 376 in Horn Lake. He loved to cook for his fellow scouts and carried that forward into adulthood, cooking for his fellow troops in the Mississippi State Guard. He progressed in rank and responsibility to the rank of G4 Logistics Chief at Headquarters in Jackson, MS. Buck loved his family and friends and never met a stranger. He was a loving, caring, Christian who professed his faith daily on Facebook. When his father passed away in January of 2019, Buck stepped up and became the protector of his mother, calling her daily, texting all during the day, taking her on shopping trips and out to eat, and just hanging around making her laugh! Buck is reunited with his Dad; his best friend, Justin Sowell; and his Uncle Steve, in Heaven. Oh, what fishing tales they could share!

The family of Samuel "Buck" McGan IV created this Life Tributes page to make it easy to share your memories.