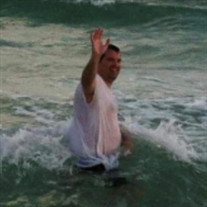 Mr. Thomas Allen Holmes, 47, passed away Monday, May 09, 2022, in Memphis, TN. A visitation will be held Monday, May 16, 2022, from 11:00 a.m. to 1:00 p.m. at Coleman Funeral Home of Southaven (626 Star Landing Road East, Southaven, MS, 38672). A funeral service will immediately follow at 1:00 p.m., also at Coleman Funeral Home of Southaven. Coleman Funeral Home of Southaven is in charge of arrangements. Thomas was born March 06, 1975, in Las Cruces, NM. He was a huge fan of football, but his favorite team was the Tennessee Vols. He was a die-hard fan, cheering them on every game, win or lose. When Mr. Thomas wasn’t watching football, he was watching the Cubs play baseball. His favorite country music artist was Reba McEntire. He enjoyed crystal art painting in his spare time. Thomas’s favorite cartoon character was Mickey Mouse. His family described him as a kind-hearted, giving person. He would give the shirt off of his back for anyone and wouldn’t expect anything in return. He was a family man, but most of all, he loved his nieces and nephews. Thomas is survived by his mother, Dian (Warren) Wood of Southaven; his sisters, Tanya (Marty) Blevins of Southaven; Angela (Donnie) Maxwell of Byhalia; Melissa Burwick of Indiana; Stefanie (Brad) Boe of Marana, AZ; and Sonya Churchill of Parker, CO; his brothers, Rick (Kristy) Holmes, Jr. of West Memphis, AR; Phillip (Brandy) Holmes of Atlanta, GA; Warren (Candice) Wood, III of Olive Branch; and David Michael Holmes of Marena, AZ; his grandmother, Elsie Ritter of Walnut, MS; and a host of nieces and nephews. He is preceded in death by his father, Rick Holmes, Sr. Online condolences may be left on his Tribute Wall at www.colemanfuneralhome.com.

The family of Mr. Thomas Allen Holmes created this Life Tributes page to make it easy to share your memories.

Send flowers to the Holmes family.