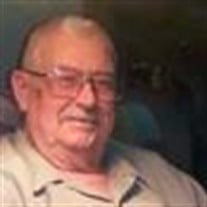 Coleman Funeral Home of Oxford William C. Osburn, 88, passed away Wednesday, August 11, 2021, at the Mississippi Veterans Home in Oxford, MS. No services are planned at this time. Coleman Funeral Home of Oxford is in charge of arrangements. William was born to the late Lee and Stella Osburn. William joined the United States Coast Guard and proudly served his country. William was a very proud veteran who dearly loved his country. He enjoyed working with his hands, woodworking, and growing vegetables. He sold his produce and woodworking’s at his local farmer’s market. His woodshop was his second home. He was a very devoted and caring husband and father and was very considerate to them. William passed on the legacy to his children the legacy of being very responsible. He will be dearly missed by his family and friends. William is survived by his three children, Carolyn (Joseph) Hester, of Shannon, MS, David L. (Kimberly) Osburn, of Jacksonville, FL, and Debra (Billy) Breedlove, of Campbell, TX; six grandchildren, Trece Gonzalez, of Port Neches, TX, Lance Osburn, of San Antonio, TX, Brittany Schwind, of NC, Caitlynn Branton, of NC, Matthew Breedlove, of Campbell, TX, and Tyler Osburn, of San Antonio; and three great-grandchildren. William was preceded in death by his wife, Helen Osburn; and his parents, Lee and Stella Osburn. In lieu of flowers, donations and memorials can be made know to the Mississippi State Veterans Home. Please leave online condolences on the Tribute Wall at www.colemanfuneralhome.com.

The family of William C. Osburn created this Life Tributes page to make it easy to share your memories.

Send flowers to the Osburn family.